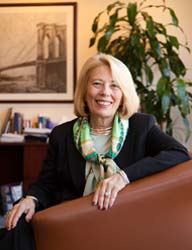 For nearly a decade, Kingsborough Community College (KCC) and MDRC have engaged in a partnership to foster innovation and build knowledge about what works to improve the academic success of students at one of the most diverse community colleges in the nation.

In 2003, Kingsborough modified its existing learning communities program to be part of MDRC’s national Opening Doors Demonstration. KCC placed freshmen in groups of up to 25 who took three classes together during their first semester, including one developmental English class. MDRC found that the program improved students’ college experience, helped them move through developmental English requirements, and increased the average number of credits earned, but there was mixed evidence about whether the program increased persistence.

Since then, KCC has participated in the national Learning Communities Demonstration, a project of MDRC and the National Center for Postsecondary Education, and in MDRC’s evaluation of Accelerated Study in Associate Programs (ASAP), which provides unusually comprehensive services to help students attend community college full time and graduate in a timely manner.