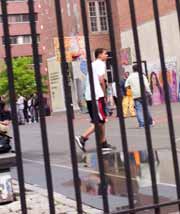 “The program has made a difference in the way people view themselves, because they see they have potential and opportunity.”
— Lourdes Castro-Ramirez, Los Angeles Housing Department, on MDRC’s Jobs-Plus initiative for public housing families, Los Angeles Times

The Jobs-Plus demonstration, which MDRC designed with the U.S. Department of Housing and Urban Development and the Rockefeller Foundation, tested whether a program that combined employment and training services, new rent rules to “make work pay,” and neighbor-to-neighbor outreach centering on work could make a difference in the economic prospects of public housing residents.

MDRC’s evaluation found that, in those sites where the model was fully implemented, Jobs-Plus increased participants’ annual earnings by 16 percent over a full seven years of follow-up. Moreover, the earnings gains, which were large while Jobs-Plus operated, continued during each of the three years after the demonstration ended. These robust, long-term findings suggest that Jobs-Plus offers a feasible and effective way for the nation’s public housing system to move beyond its core function of providing housing subsidies to take on another important role — serving as a platform for work.

In 2015, the U.S. Department of Housing and Urban Development (HUD) launched a national replication of Jobs-Plus. HUD’s expansion of Jobs-Plus is being evaluated by MDRC as part of a study that will also provide important evidence about the sustained effects of the original program and whether the effects continue when the program is replicated in various settings.