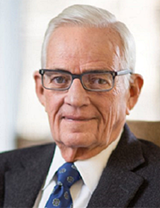 The Board of Directors and the staff of MDRC mourn the passing Paul H. O’Neill, former U.S. Treasury Secretary, CEO of Alcoa, and long-time member of MDRC’s Board of Directors. O’Neill died of lung cancer on April 17 at his home in Pittsburgh. He was 84.

In addition to being Treasury Secretary for President Bush, O’Neill served at the Office of Management and Budget in the Nixon and Ford Administrations, rising to Deputy Director in 1975-1977. His corporate career included 10 years at the International Paper Company, where he was President from 1985 to 1987. In 1987, he joined Alcoa, where we served as Chairman and CEO until 1999.

Regardless of his position — CEO of Alcoa or Secretary of the Treasury, staffer at the federal Office of Management and Budget or Board Chair at MDRC — Paul O’Neill was guided by an unwavering commitment to the common good. With an uncanny ability to envision the future and a unique capacity to lead and manage toward that future, he laid the foundation for the modern-day MDRC, helping to guide the organization from start-up to established leader in the evidence-based policy movement.

Paul O’Neill is survived by his wife, four children, 12 grandchildren, and 15 great-grandchildren. MDRC extends its condolences to the O’Neill family.