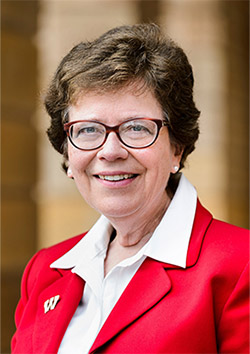 MDRC is pleased to welcome Dr. Rebecca Blank, Chancellor of the University of Wisconsin-Madison, back to the MDRC Board of Directors. She previously served on MDRC’s Board in 1993-1997 and 2000-2009.

“It’s a great pleasure to welcome Becky back to the MDRC Board,” said Mary Jo Bane, Chair of the MDRC Board of Directors. “She brings an unparalleled combination of experience as an accomplished policymaker and administrator, a world-class education leader, and an astute policy researcher.”

Blank has been the Chancellor of Wisconsin’s flagship university since July 2013. She served as Deputy Secretary and Acting Secretary of Commerce under President Obama. She was a member of the Council of Economic Advisers under President Clinton.

An economist, Blank was dean and professor of public policy and economics at the Gerald R. Ford School of Public Policy at the University of Michigan from 1999 to 2008. She’s also served on the faculties of Northwestern and Princeton and was a fellow at the Brookings Institution.