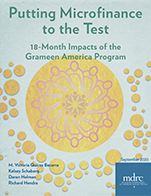 The rigorous, independent, third-party evaluation determined that the Grameen America microlending model resulted in a reduction of measures of material hardship and an increase of credit scores and business ownership. The program boosted business earnings but has had no effect so far on overall net income. The microlending program also improved participants’ feelings of overall financial well-being.

The 18-month study, which was funded by Robin Hood, New York City’s largest antipoverty organization, examined 1,492 women in 300 loan groups who applied to the Grameen America microlending program in Union City, NJ. It marks the first time a microfinance institution in the United States has been evaluated using a randomized controlled trial, which is often referred to as the gold standard of evaluations, as it uses the same rigorous methods as pharmaceutical clinical trials.

Highlights from the evaluation of the Grameen America program, include:

“Building new paths to economic mobility is not easy, and these encouraging results demonstrate the importance of Grameen America’s work in a community that struggles economically in even the best of times,” said Virginia Knox, President of MDRC. “We thank the talented staff at Grameen America — and especially the program participants in Union City — for allowing us the opportunity to document their experiences in this rigorous evaluation.”

“For Grameen America, the 18-month results stand as a positive demonstration of the collective impact of our increasingly vital work. The findings substantiate a statistically significant reduction in key metrics of material hardship, improved credit scores, and increase in business ownership and nonretirement savings for the economically marginalized businesswomen in our microfinance program,” said Andrea Jung, President and CEO of Grameen America. “We are very pleased to see a statistically significant increase of $523 in monthly gross revenue compared to the control group. This noteworthy finding suggests that business owners are investing more of their earnings back into their business in the early years.”

“With this unique independent validation of our model, we have even greater incentive to continue to advance and expand the program,” said Jung. “We look forward to deepening our understanding about the many aspects of Grameen America’s impact in the study’s final 36-month report.”

“Robin Hood funded the Grameen and MDRC study to understand whether microfinance could act as a viable tool to lift immigrant women out of poverty in the United States. While the results are mixed in terms of its impact on overall net income, we found the reductions in material hardship and increases in credit scores very promising,” said Amanda Stern, Senior Program Officer at Robin Hood. “We are proud to be able to add a rigorous randomized-controlled trial — the gold standard of evaluation — to the national body of research on microfinance.”

The interim results of the Grameen America program evaluation are the second set of findings in the long-term study conducted by MDRC. The final evaluation results covering three years of follow-up are scheduled to be released next year and will present impacts on many of the same outcomes, as well as asset-related outcomes.

About MDRC: MDRC is a nonprofit, nonpartisan education and social policy research organization dedicated to learning what works to improve programs and policies that affect the poor. MDRC is best known for mounting large-scale demonstrations and evaluations of real-world policies and programs targeted to low-income people. We helped pioneer the use of random assignment — the same highly reliable methodology used to test new medicines — in our evaluations. From welfare policy to high school reform, MDRC’s work has helped to shape legislation, program design, and operational practices across the country. Working in fields where emotion and ideology often dominate public debates, MDRC is a source of objective, unbiased evidence about cost-effective solutions that can be replicated and expanded to scale.

Putting Microfinance to the Test

The Story of a Practitioner-Researcher Partnership: Studying the Effects of the Grameen America Program