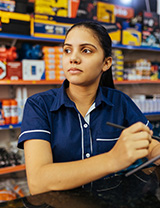 (March 10, 2022)—Nonprofit research organization MDRC and Grameen America today released the final, 36-month results from MDRC’s evaluation of the Grameen America microfinance model, a program that provides microloans to women living in poverty seeking to launch or expand small businesses. Grameen America has invested over $2.26 billion in more than 146,000 women of color with low incomes since January 2008.

“Building new paths to economic mobility is no easy feat, but these results demonstrate the importance of Grameen America’s work in disadvantaged communities brimming with untapped potential,” said Andrea Jung, President and CEO of Grameen America. “We are proud to be able to add a rigorous randomized controlled trial—the gold standard of evaluation—to the field of microfinance.”

“Grameen America’s sustained impact three years after women first joined the program is remarkable,” said Virginia Knox, President of MDRC. “These kinds of results happen because of careful design choices and constant attention to implementation on the ground. The program has a clear focus on an undeserved group that does not have other financial alternatives in their communities—women entrepreneurs with low incomes—and is intentional about working with them over an extended time.”

“As a funder who strongly values metrics and solutions grounded by rigorous evidence and evaluation, Robin Hood is thrilled to have partnered with Grameen America as they built a microlending model that gives women greater agency, more choices, and maps a realistic path for securing their own economic futures. MDRC’s empirical evaluation adds to the understanding of the role that microfinance can play in the fight against poverty and hardship,” said Sarah Oltmans, Robin Hood’s Chief of Grant Strategy.

The 36-month study, which was funded by Robin Hood, examined 1,492 women in 300 loan groups who applied to the Grameen America microlending program in Union City, NJ. It marks the first time a microfinance institution in the United States has been evaluated using a randomized controlled trial, considered the most rigorous way to learn whether a program has positive effects, as it uses the same methods as research on new medical treatments.

Highlights from the evaluation of the Grameen America program include: