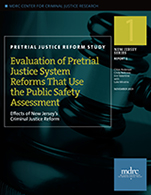 New Brunswick, N.J. — Today, the MDRC Center for Criminal Justice Research released a new study showing New Jersey’s Criminal Justice Reform Act (CJR) is producing a number of important impacts on the state’s criminal justice system, including helping to reduce arrests, increase the use of summonses in lieu of warrants, and increase the number of defendants released without conditions.

With CJR, a set of pretrial policy changes that went into effect January 1, 2017, the state of New Jersey found success in shifting from a pretrial justice system that relied heavily on money bail to a more objective system; now, defendants are detained only when they pose a public safety risk — rather than when they can’t afford to pay bail — and those who are detained spend much less time in jail before trial. New Jersey’s approach builds on bail reform models from jurisdictions like Kentucky, Pittsburgh, PA, and Maricopa County, AZ.

“Courts across the United States are in a period of unprecedented reforms, but they are doing this with little guidance from empirical evidence about how the reforms might affect outcomes,” said Cindy Redcross, Director of the MDRC Center for Criminal Justice Research and lead author of the study. “This evaluation of New Jersey’s sweeping reforms provides some of the most rigorous evidence to date about the effects of an ambitious package of reforms, including the virtual elimination of money bail. These results offer important and promising lessons showing that the criminal justice system and its stakeholders can work together to dramatically reduce the number of people sitting in jail unnecessarily”.

“The first MDRC report confirms what many of us have suspected about the new bail system: it has meaningfully reduced the number of people whose lives have been harmed by pretrial incarceration without significant increases in pretrial crime rates or non-appearance rates,” Alexander Shalom, Senior Supervising Attorney and Director of Supreme Court Advocacy at the ACLU-NJ said. “That is a major victory for civil liberties. But there is more work to be done. Future reports that address the role of race in the pretrial process will prove critical as we must strive not only to reduce the number of people jailed, but also eliminate the gross racial disparities that plague our criminal legal system.”

As part of its reform efforts, New Jersey implemented Arnold Ventures’ Public Safety Assessment (PSA), an evidence-based risk assessment created to give judges more information when deciding whether to release a defendant before trial and under what conditions. The PSA has been implemented in dozens of jurisdictions nationwide and validated over years of testing. The PSA is used together with a “decision-making framework,” or DMF — a unique set of policy recommendations created by each jurisdiction that reflects state and local laws, as well as the community’s justice priorities. The jurisdiction’s DMF provides judges with information they previously often didn’t have access to: identifying low- and medium-risk defendants — the vast majority — who can safely return to their communities before trial, as well as the much smaller number of high-risk defendants. This leads to more informed decision making.

“The pretrial changes implemented in New Jersey show the range of options available for jurisdictions across the country to safely decrease incarceration and reduce reliance on money bail,” said James Cadogan, Vice President of Criminal Justice at Arnold Ventures. “This is historic reform; findings like MDRC’s show that New Jersey has achieved not just policy change, but the critical work of culture change. Through their commitment, criminal justice practitioners, policymakers, researchers, and activists have changed thousands of people’s lives for the better, with countless more to follow.”

MDRC’s report follows on the heels of the New Jersey Court’s 2018 Report to the Governor, which showed a 43.9 percent reduction in the pretrial jail population from January 2015 to January 2018 with no uptick in pretrial crime rates and continued high court appearance rates.

Arnold Ventures is a philanthropy dedicated to tackling some of the most pressing problems in the United States. Founded by Laura and John Arnold in 2010, Arnold Ventures’ core mission is to improve lives by investing in evidence-based solutions that maximize opportunity and minimize injustice. More information about Arnold Venture’s work is available at www.arnoldventures.org.

About the MDRC Center for Criminal Justice Research

The MDRC Center for Criminal Justice Research works with national and local criminal justice agencies, policymakers, courts, and community-based organizations to answer pressing questions and improve both the effectiveness of the criminal justice system and the outcomes of individuals involved in it. MDRC is a nonprofit, nonpartisan social policy research organization created in 1974. MDRC is dedicated to learning what works to improve programs and policies that affect the poor.