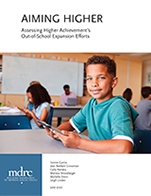 Many talented students in under-resourced schools do not reach their full potential. Research shows that by sixth grade, children born into poverty have likely spent 6,000 fewer hours learning than their middle-class counterparts. Higher Achievement, an intensive summer and after-school program, aims to close that learning gap. It offers participants more than 500 hours of academic enrichment activities a year to help them meet the high academic standards expected of college-bound students. Known as “scholars,” Higher Achievement students enter the program during the summer before either fifth or sixth grade and commit to attending through eighth grade. The summer program consists of six weeks of morning classes in English Language Arts (ELA), math, science, and, in some cases, social studies, followed by enrichment activities in the afternoon, including chess, cooking, art, and soccer. During the school year, in addition to the program’s regular study hall and enrichment activities, a cadre of mostly young professionals volunteer one day a week, delivering 75-minute ELA or math lessons to small groups of scholars. These volunteers receive detailed lesson plans and training so they can successfully execute the program’s rigorous curricula. Part of what makes Higher Achievement affordable is its use of volunteers in this way.

An earlier experimental evaluation of Metro DC, Higher Achievement’s flagship affiliate in Washington, DC, and Alexandria, Virginia, found that the program was effective in improving academic performance two years after students applied. Since then, Higher Achievement has expanded to three new cities: Baltimore, Maryland; Richmond, Virginia; and Pittsburgh, Pennsylvania. Keenly aware that many effective flagship programs fail to be effective in new locations, the federal government funded this experimental validation study to examine the impacts at these expansion sites. Eligible students were randomly assigned either to a program group that could participate in Higher Achievement, or to a control group that could not enroll in the program. Comparing the two groups’ outcomes provided an estimate of the program’s impacts.

The study found that the expansion sites experienced many of the implementation challenges common to school-based, out-of-school-time programs (for example, staff turnover, coordination with the host school, and lower-than-hoped-for attendance by middle school students), as well as those often seen in new programs (such as a lack of strong relationships with key partners and difficulty recruiting volunteers). Even so, Higher Achievement was found to be at least adequately implemented in all three cities. The study found that the program’s detailed lesson plans, with scripted questions and student instructions, enabled the volunteers to deliver rigorous academic lessons. Training is critical, though, so volunteers know how to respond when “off-script” questions or behavior issues arise.

Higher Achievement continued to be effective in the expansion sites. In particular:

The ability to improve middle school grades is notable; research shows that students who have stronger grades in middle school are more likely to succeed in high school. Indeed, school grades are more strongly related to later success in the workplace and in life than test score performance. Higher Achievement’s successful replication of the model in new cities suggests it could serve as a model to help students succeed nationwide.