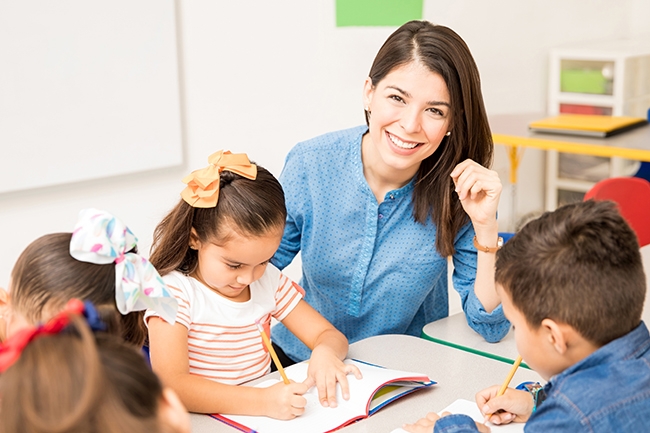 This issue focus was originally published as a blog post by New America.

One in three children under the age of five in the United States has at least one parent who speaks a language other than English at home. These children bring linguistic and cultural assets to the early childhood programs they attend. However, many programs struggle to identify dual language learners (DLLs), understand their skills, and, ultimately, support their development, as current assessment tools are primarily developed for monolingual, English-speaking children. Today’s tools fail to capture the complexity of children’s skills across multiple languages and can perpetuate false deficit narratives about DLLs.

New America and MDRC recently hosted a webinar bringing together leading researchers and practitioners working with DLL communities to envision new assessments for DLLs. These experts surfaced several core aspects of an accurate, actionable, and equitable assessment approach for DLLs:

Employ multiple assessment approaches to identify DLLs and understand their proficiency in each language.

Identifying which children are DLLs is a necessary first step for enacting classroom practices that respond to children’s skills and experiences. Dr. Linda Espinosa, Professor Emeritus of Early Childhood Education at the University of Missouri, Columbia, explained the current state of identification policies. “We have very few states with common procedures, so programs are basically left on their own to identify [DLL children],” she said. A noted exception is California, where 59 percent of children under five are DLLs. The state passed a bill in 2021 mandating publicly funded programs use a family language survey to collect information about the languages children speak. Importantly, gathering accurate, detailed information from families relies upon strong home-school connections that make families feel welcome and safe sharing personal information.

Direct assessments of children’s proficiency in each of the languages they speak can supplement information provided by families on children’s language abilities. When used appropriately, direct assessments can help paint a broader picture of children’s strengths in each of their languages, and also identify target areas for continued growth. This information can support educators in providing individualized instruction to children based on their unique abilities in each language that they speak.

Assessments in domains other than language, like early literacy, mathematics, and science, are almost exclusively conducted in English, meaning DLLs’ scores often reflect their English language ability rather than their competencies in these areas. However, the solution is more complex than just assessing children in their home language(s). When assessments are available in languages other than English, they are often only available in a minority of languages and are direct translations from English-language versions that were normed with monolingual, English-speaking samples. Direct translations cannot accurately measure the intended construct when those constructs vary across languages and cultures. For example, common phonemic awareness tasks in English ask children to blend and break apart components of compound words like “football.” When translated into the Spanish “fútbol,” the word neither has component Spanish-language parts nor does it typically refer to the same sport.

Dr. Lisa López, Professor of Educational Psychology at the University of South Florida, acknowledged the need to “think outside the box about assessments to capture what our dual language children are really capable of doing, which we know is a lot.” Developing flexible assessment protocols that allow children to receive and respond to items in any of their languages is a promising route to accurately capture DLLs’ skills across languages and domains. For example, math screeners evaluating children’s sorting skills often ask children to match like-shapes or sort similar items into groups. A child may be more familiar with task-relevant words like “match,” “same,” and “pair” in their home language if they have practiced sorting at home doing household tasks with family members like folding laundry and putting away dishes. In this example, children may benefit from hearing the instructions in both English and their home language. Flexible assessment protocols require that assessors understand children’s linguistic and sociocultural background and speak children’s home language(s) to translate prompts and understand responses.

Help educators use data to improve the experiences of DLLs in early education settings.

Although data is an important tool for providing strong instruction, it can be challenging for educators to access and use data in real time to ensure their practices respond to children’s skills, knowledge, and experiences. Educators working with DLLs face additional challenges understanding complex assessment data collected across multiple languages. On-going supports and resources for educators, as opposed to one-off trainings, can promote sustained, data-driven program environments. As an illustration, Briya Public Charter School, a two-generation early childhood program in Washington, D.C., supports its educators in gathering information on children’s skills in their home languages and has compiled comprehensive resources on best practices for partnering with DLLs and their families. Lisa Luceno, Senior Director of Early Childhood Strategy at Briya, noted that their approach “brings teachers into the fold and has them contribute their expertise to create our own library of best practices.”

The multifaceted linguistic and cultural assets of DLLs are all too often overlooked by current assessment paradigms. Dr. Sandra Barrueco, Professor of Psychology at The Catholic University of America, encouraged reframing the complexity of assessing DLLs by thinking about “the richness of language and the richness of human beings.” Developing novel assessments in partnership with DLL communities is an important step towards recognizing the richness of DLLs and supporting the educators who work with them. To this end, MDRC’s recently launched Measures for Early Success initiative is beginning the work to make assessments more culturally and linguistically responsive, particularly for DLLs, to ultimately drive more equitable learning opportunities and outcomes for young children across the country.