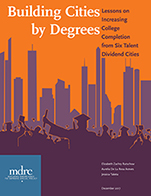 While completion of a college credential is a critical step toward increasing one’s viability in today’s labor market, only about 40 percent of Americans earn an associate’s or bachelor’s degree by age 27. Many policymakers, education leaders, and philanthropic organizations have focused on improving graduation rates. In 2011, the Kresge Foundation sought to build on this work by launching the National Talent Dividend $1 Million Prize Competition. Leaders of the initiative posited that a city’s per capita income would rise as the number of degree holders rose, and  the contest promised to award $1 million to the city with the greatest proportional increase in its college degree completion over a four-year period. Fifty-seven of the nation’s most populous cities participated in the competition; the winner was Akron, Ohio, which increased its degree attainment by 20 percent.

Given the strong performance of many cities in the competition, the Kresge Foundation was interested in learning which particular strategies may have been influential in their postsecondary gains and in sharing potential lessons from the Talent Dividend work with the larger field. This case study examines the efforts of six of the top cities in the competition (Akron; Columbia, South Carolina; Omaha, Nebraska; Orlando, Florida; Portland, Oregon; and Richmond, Virginia) in an effort to build a set of hypotheses around the activities that may have helped these cities increase degree attainment. In examining the efforts of multiple institutions to raise graduation rates within their city, this study departs from higher education research that tends to focus on individual colleges. And because three colleges in the case study cities have been among the nation’s most successful in decreasing achievement gaps between low-income and traditionally underrepresented minority students and their more wealthy, white peers, the research also focuses on identifying which approaches might be particularly important in closing such gaps.

Overall, this study found several key factors that might help improve postsecondary completion. First, nearly all the case study cities had established partnerships across education sectors and between colleges and employers that helped bring hundreds to thousands more students into postsecondary institutions. Specific interventions aimed at easing students’ transitions between high school and college, and between two-year and four-year college environments, seemed to be particularly instrumental in helping them earn college credits and credentials. In supporting underrepresented minority and low-income students, strong transfer agreements between two-year and four-year colleges, widespread financial aid, and intensive student services seem to play a key role. Finally, contextual factors, such as the economic downturn, often influenced cities’ efforts and outcomes. Successful cities found ways to highlight their postsecondary opportunities and promote student achievement within their changing environments.

A Look at MDRC’s Research