Building on the GED | MDRC
Skip to main content

Building on the GED

Promising Results from a Bridge-to-College Model 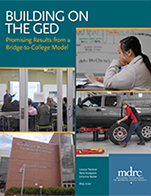 Northeast Wisconsin Technical College (NWTC) in Green Bay, Wisconsin, implemented a bridge-to-college program in 2015 to help more students earn their GED credentials and transition to postsecondary education. This GED Bridge program had three components that distinguished it from NWTC’s traditional GED class, called GED Prep 2: (1) a NWTC-developed “contextualized” curriculum — one that focused on original texts and materials related to specific careers (to build students’ academic skills and raise their awareness of those careers) — in contrast to GED Prep 2 classes that focused on GED test preparation materials; (2) individual support to help students plan their transition to postsecondary education, plus career exploration and transition planning in class; and (3) managed cohort enrollment, meaning that students started each class section together, in contrast to the open enrollment of the GED Prep 2 class where new students could enroll at any time.

This report describes an evaluation of NWTC’s GED Bridge program that included impact, implementation, and cost analyses. The impact analysis employed a random assignment design. Eligible applicants were randomly assigned to either the GED Bridge class or the GED Prep 2 class and followed for 18 months. The research team used administrative data to measure differences in class attendance and persistence, GED testing and completion, and enrollment in postsecondary education.

This evaluation contributes to a small but growing body of research that suggests that bridge-to-college programs may be effective in improving both GED completion and postsecondary enrollment.

A Career Approach to GED Instruction: A Case Study

Preparing Students for College and Career: A GED Bridge Model in Wisconsin