Findings from the B3 Exploratory Study of the DadTime Intervention 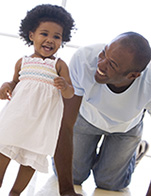 In recent decades, fatherhood programs have developed services to support men as they seek to boost their parenting skills, strengthen their marriages and relationships, and improve their financial well-being. Yet it remains challenging to get fathers to attend and complete these programs. The challenges can be different from those facing parenting programs where either couples or mothers are the intended participants.

In an attempt to tackle these challenges with insights from behavioral economics and other disciplines, the U.S. Department of Health and Human Services’ Office of Planning, Research, and Evaluation engaged a team led by MDRC to conduct the Building Bridges and Bonds (B3) study, with additional funding from the Office of Family Assistance. The B3 study team convened stakeholders to collaborate on the development of a smartphone app called DadTime that integrated with Just Beginning, a five-session parenting curriculum. The app, which drew on principles of behavioral science, offered Just Beginning–related reminders, planning tools, and encouragement to program participants. This report summarizes the results of an exploratory study conducted in 2018 and 2019 that used a randomized field trial to test whether the app could be used easily by fathers and could boost program attendance and completion.

Smartphone apps were only beginning to emerge as a tool for promoting connection with fathers around the time that the study team started to develop DadTime’s content and features, in 2016 and 2017. Although some of the other smartphone apps that existed in 2016 included features similar to DadTime’s, they were introduced without formal evaluations. The limited published research on smartphone interventions has focused on usability, and has not tested whether an app can promote program attendance specifically. This is one of the largest studies testing the effectiveness of an app for fathers.

Various follow-up analyses do not provide a clear pattern or point to a single mechanism by which the app could have decreased attendance. Factors related to father demographics do not appear to explain the results, nor do factors related to the structure or geography of the usual services programs. The relatively small sample size for the overall study and the low percentage of fathers who used the app overall make it difficult to analyze impacts among different groups. However, lower Just Beginning participation seems to be concentrated among fathers who never activated the app and thus did not have any exposure to DadTime.

The findings in this study are consistent with research conducted since DadTime began, which shows little evidence that smartphone apps can improve program attendance. However, an app integrated with a different workshop format or curriculum could show different impacts, or perhaps an app could have an impact on a fatherhood engagement goal other than attendance.

The DadTime study used a randomized field trial to test the impact of offering access to an app on fathers’ Just Beginning attendance. Due to its small scale this was an exploratory study, which means it can provide an in-depth look at the subject, but not conclusive evidence. Fathers who consented to participate in the B3 study at the three organizations implementing Just Beginning were randomly assigned to one of three groups: the services-as-usual group (50 percent of fathers); the “Full DadTime” group (25 percent), with access to the DadTime app content both during and after Just Beginning participation; or the “Partial DadTime” group (25 percent), with access to DadTime content only after Just Beginning participation concluded. The design team developed content for two versions of DadTime:

Over the course of 18 months, 245 fathers were randomly assigned to the Full and Partial DadTime groups. Of those, 224 fathers (91 percent) reported having smartphones at intake: 117 in the Full DadTime group and 107 in the Partial DadTime group. This is one of the largest studies testing an app meant to increase fathers’ attendance at an intervention.

A Roundup of Findings from the Building Bridges and Bonds Study