A Synthesis of Findings from Evaluations of 13 Programs 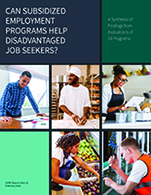 Even in a strong economy, some job seekers struggle to find and keep jobs. These individuals often have limited work experience, few educational credentials and job skills, and other characteristics such as criminal records or primary caretaking responsibilities that make it difficult for them to compete in the labor market. For decades, government entities, private foundations, and nonprofit organizations have developed programs to help disadvantaged job seekers. One such approach is subsidized employment, where the government temporarily subsidizes all or a portion of wages for job seekers to provide a bridge to unsubsidized employment and improve participants’ longer-term employment prospects. Past research has found mixed results regarding these programs’ ability to achieve those goals.

In 2010, the U.S. Department of Health and Human Services launched the Subsidized and Transitional Employment Demonstration (STED) and the U.S. Department of Labor launched the Enhanced Transitional Jobs Demonstration (ETJD), complementary large-scale research projects designed to build rigorous evidence on the effectiveness of the latest generation of subsidized employment models. The projects recently finished random assignment studies of 13 subsidized employment programs; this report summarizes findings from the studies and discusses the implications for practitioners, policymakers, and researchers. This report also presents employment and earnings impacts — the changes in participants’ outcomes attributable to each program — over an extended follow-up period of up to five years for each program, findings that provide additional insight into whether subsidized employment programs can help participants make lasting changes in their lives.

This report seeks to answer the following questions:

The 13 subsidized employment programs evaluated as part of the STED and ETJD projects intended to help reconnect participants to work, or in some cases education or training, in order to improve their long-term economic prospects. MDRC conducted random assignment evaluations of these programs to determine whether they achieved their goals and improved participants’ outcomes, and this report synthesizes findings across the STED and ETJD evaluations.

Overall, the evaluations found that subsidized employment programs can improve employment, earnings, and other outcomes under some circumstances, and for a variety of populations. However, the pattern of results makes it difficult to draw firm conclusions about which type of program works best, and for whom.

Programs serving noncustodial parents (those without custody of at least one of their children) and formerly incarcerated adults often improved child support and recidivism outcomes, respectively, particularly in the short term, and sometimes even when there were few earnings or employment impacts.

Improvements in employment, earnings, and recidivism were typically concentrated among people who were less employable (that is, those who had been out of the workforce longer when they enrolled in the study, were at higher risk of recidivism, or did not have high school diplomas or equivalents).

One program’s benefits outweighed its costs from society’s perspective — that is, taking into account benefits and costs to the government, participants, and in this program’s case, the victims of crimes committed by study sample members. Three other programs resulted in earnings increases that persisted throughout the extended follow-up period and exceeded the programs’ net costs, so those programs’ benefits may have also outweighed their costs from society’s perspective. However, it is unlikely that any of the programs saved the government money.

This report synthesizes findings from 12 evaluations of 13 subsidized employment programs. (One evaluation used a three-group test to evaluate two programs.) Each evaluation included an implementation study and an impact study, and 11 of the 12 evaluations included a cost study.

This report focuses on findings from the impact studies. Each impact study used a randomized controlled trial design in which individuals eligible for services were randomly assigned to a program group who had access to the subsidized jobs program or to a control group who did not, but who may have sought out other services. The impact studies estimated impacts on employment and earnings, well-being, and other areas relevant to the populations studied, such as child support payments made by noncustodial parents. Data sources for the impact studies included administrative wage records, up to three rounds of participant surveys administered up to 30 months after random assignment, and various other records, depending on the populations studied (for example, child support, criminal justice, or public-assistance records).

Findings from In-Depth Interviews with Participants in Subsidized Employment Programs