Findings from the B3 Study of the Just Beginning Parenting Intervention 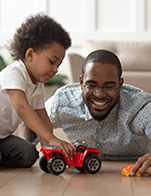 A father’s support—both financial and emotional—is linked to better outcomes on nearly every measure of a child’s well-being. Past research has shown that fathers with low incomes—particularly those who do not live with their children—find it particularly difficult to provide that support.

To continue building an evidence base for effective, innovative interventions that support fathers and their families, the U.S. Department of Health and Human Services’ Office of Planning, Research, and Evaluation, with funding from the Office of Family Assistance (OFA), engaged a team led by MDRC to conduct the Building Bridges and Bonds (B3) study. B3 partnered with fatherhood experts and practitioners to identify new and promising approaches to supporting fathers working toward economic stability and improved relationships with their children. Parenting and economic stability are in fact two of the three required program areas for OFA Responsible Fatherhood grants. The study team tested three innovative, interactive, skill-building approaches that addressed parenting and economic stability in the context of existing Responsible Fatherhood programs. Just Beginning is the parenting intervention tested in the B3 study and the subject of this report. The Just Beginning intervention invited fathers with their young children to participate in one-on-one parenting training sessions that included engaging skill-building videos and father-child play activities. In Just Beginning, a father learned and tried out one new strategy for interacting with his child per session, for five sessions.

Is it feasible to include children in fatherhood program services, and what is necessary to facilitate their inclusion?

Does a parenting program that works with fathers and young children together generate more positive effects on parenting and father-child relationships than standard program approaches?

Although fatherhood programs use a variety of approaches to encourage fathers’ positive involvement with their children, the existing evidence has shown that these programs have had minimal success in achieving the goals of building parenting skills and strengthening father-child relationships. Their lack of evidence of effectiveness provided the rationale for developing and testing new approaches.

This report describes Just Beginning’s effects on father-child relationships and the costs of implementing the curriculum. It also analyzes how services operated and who participated in them, information that serves as context for the other findings.

Findings from the B3 Study of a Cognitive Behavioral Program

A Review of the Literature