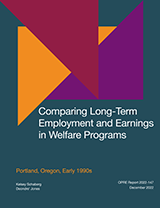 The Personal Responsibility and Work Opportunity Reconciliation Act passed in 1996 replaced the Aid to Families with Dependent Children program with the Temporary Assistance for Needy Families program, which imposed, among other things, work requirements on participants who received benefits for a certain period of time and time limits on benefits that were paid with federal funds. Around the same time, there were several evaluations of welfare-to-work programs that tested the effects of alternative approaches to helping individuals on welfare find jobs and leave public assistance. Some of these evaluations—including the National Evaluation of Welfare-to-Work Strategies (NEWWS)—found these new approaches led to some positive short-term effects for participants. It is unclear how individuals who were receiving welfare fared longer term and whether the new approaches raised families’ incomes enough to move them out of poverty.

This report is part of the From Theory to Practice project and presents findings from an analysis of 20-year outcomes and impacts of an employment-focused program offered to welfare recipients in Portland, Oregon, in the 1990s, as part of NEWWS. The findings described in this report represent some of the first available evidence on how individuals who previously received welfare fared in the labor market over the long term and on how sequence and cluster analyses can provide a richer picture of their trajectories and program impacts. In addition, this report reflects on the efficacy of sequence and cluster analyses as tools to measure 20- year impacts of employment-focused programs.

The research team used a sequence analysis in combination with a cluster analysis to look at individuals’ 20-year employment and earning trajectories. These analyses were run separately for the program and control groups.

A sequence analysis provides a means for comparing individuals’ trajectories—in this case, the patterns of them moving in and out of employment and of their earnings levels—and quantifying the extent to which they differ. For example, it is possible that many individuals ended up in stable employment with high wages by the 20-year point. Some of these individuals may have had a rapid transition into sustained work with high wages, while others may have struggled to find work or got stuck in low-paying jobs. A sequence analysis—unlike many more traditional methods—captures this distinction because it considers the full details of individuals’ trajectories and not just their outcomes in one time period.

The research team performed a conventional subgroup analysis to better understand whether NEWWS was more effective for individuals with certain characteristics than individuals with other characteristics. The full sample from the NEWWS Portland site—individuals in both the program and control groups—was split into three subgroups based on individuals’ employment and earnings histories in the two years before entering the study. The team then ran impact analyses separately for each subgroup to see if NEWWS had an effect on the outcomes of the individuals in each subgroup.

Which Improves Welfare Recipients’ Earnings More in the Long Term?