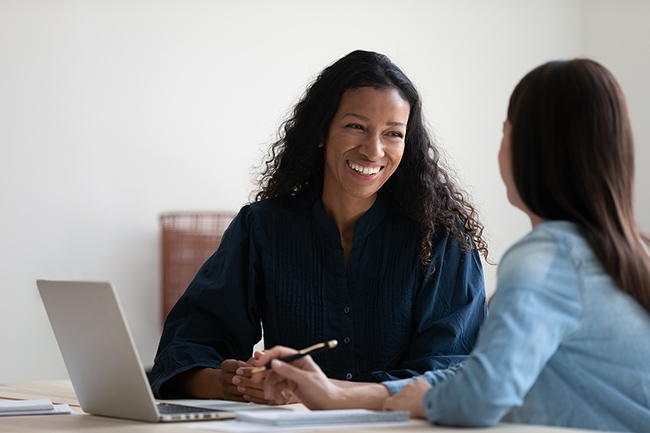 An impressive and growing body of evidence shows that dramatic improvements in students’ outcomes are possible, even though many students face considerable barriers to college completion. This brief examines one of the strongest bodies of evidence in higher education: programs that last multiple years and combine high-intensity advising from advisers or coaches, financial assistance, and real-time data to support students. The studies discussed here all used randomized controlled trials, the highest standard of evidence recognized by the U.S Department of Education and the scientific research community.

Students face multiple hurdles that make it difficult for them to complete college. The cost of college is one major hurdle—and goes beyond tuition. College costs like transportation, textbooks, housing, and food, together often exceed tuition. In addition, two-thirds of entering freshmen in community colleges are required to take remedial courses that do not count toward a degree. Most never graduate. Other factors also pose barriers, like balancing work and family along with school, lack of information about college, lack of social and family resources to navigate college, and institutional policies and practices that create obstacles to student success. These and other systemic barriers disproportionately affect students of color and students from low-income backgrounds.

Combining frequent advising in which advisers take the initiative to communicate with students with additional financial aid can help students overcome barriers, accumulate more credits, remain enrolled, and graduate. Two decades of rigorous research in postsecondary education provide clear lessons that can be put into action to help students overcome barriers to academic progress and college completion. By themselves, short-term interventions such as financial awards, enhanced advising (as has been tried in, for example, InsideTrack or Opening Doors, which also include small stipends) and messages guided by behavioral science can produce small effects, but do not always produce measurable gains. When these strategies are combined more comprehensively, however, there is clear evidence that they can lead to large improvements in graduation.

The City University of New York’s (CUNY’s) Accelerated Study in Associate Programs (ASAP) is perhaps the most effective and comprehensive program that has been studied. CUNY ASAP is a three-year program that requires students to enroll full time in a community college associate degree program and meet with advisers at least twice per month. Advisers also have small caseloads, generally not more than 125 to 150 students each.  Students must participate in tutoring, personalized career services, and attend courses scheduled during specific morning, afternoon, or evening blocks of time for the first year, with encouragement to take remedial courses early. Students also receive a tuition waiver to fill any gap between financial aid and tuition and fees, free MetroCards for public transportation, and the free use of textbooks. ASAP nearly doubled the percentage of students who graduated after three years in an independent evaluation at CUNY, increasing the number of graduates by 18 percentage points, with consistent results across racial groups. ASAP is also proving to be replicable and effective in a broader range of settings: It nearly doubled the three-year graduation rate again when it was tested in three Ohio colleges, increasing the number of graduates by 16 percentage points. (Figure 1 shows pooled results from both evaluations.) Interim findings at a four-year institution also show positive effects. Similarly, programs that use an advising structure like ASAP’s to help students pursue particular career pathways have been shown to have significant, positive long-term effects: Project Quest increased participants’ earnings and the Valley Initiative for Development and Advancement increased the percentage who earned credentials. 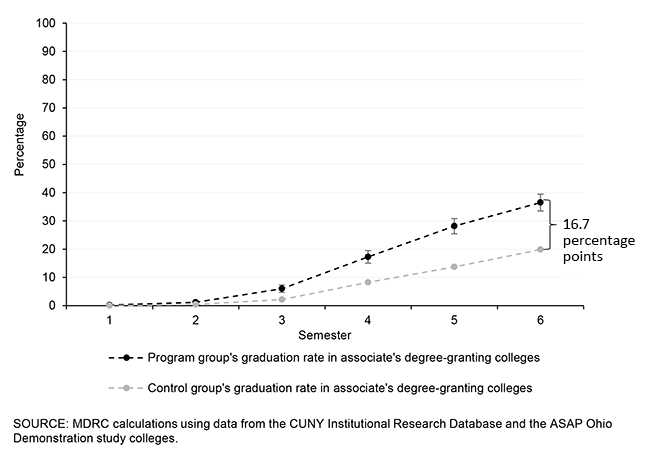 Other rigorous studies show positive effects on completion for programs that share the core features of advising tied to additional financial aid and other forms of student support, such as One Million Degrees and Bottom Line. Personalized coaching programs such as InsideTrack also have shown effects on continued enrollment and suggestive effects on graduation, while programs such as Detroit Promise Path have increased persistence and credit accumulation. Additional programs that provide counseling or advising and financial support with a focus on particular employment sectors (programs such as Year Up, I-BEST, Health Careers for All, and Bridge to Employment in Healthcare) have also seen positive findings in rigorous studies.

Implementing a comprehensive program is not easy, though. Although the Monitoring Advising Analytics to Promote Success program appeared effective at Georgia State University where it was first adopted, it did not produce positive effects when tested across 11 universities. Stay the Course showed some promising signs of effectiveness, but two evaluations have yet to produce conclusive, positive findings. When deciding on programs to support their students, states and colleges should focus on proven programs, and seek guidance and support to implement those programs as intended.

Expanding proven programs to intentionally reach greater numbers of students of color and students from low-income backgrounds can lead to dramatic improvements in equity. The programs discussed above already serve high proportions of students from low-income backgrounds, many of whom are students of color. Although most of these proven programs have not explicitly focused on racial equity, the evidence suggests that they are effective for diverse populations. The research on CUNY ASAP and the Ohio replication colleges, for example, showed that the large, positive effects were generally consistent across different racial groups. Adopting these programs at historically black colleges and universities or other minority-serving institutions or modifying the programs to adopt an intentional approach to supporting students of color could also lead to innovations and modifications that meet the needs of specific students more directly. For example, advisers could be selected to reflect the demographics of their students.

Federal and state programs aimed at increasing postsecondary completion should fund evidence-based programs such as those discussed in this brief, while also allowing room for innovation and expanding the evidence base. Comprehensive, multiyear advising programs that combine additional financial aid with strong student support are the most proven programs for improving student success. Colleges need additional funding to adopt and expand these programs. They also need guidance to ensure that the programs are implemented as designed, and major adjustments are not made or pieces dropped from their original models. There is still more to learn about the long-term economic effects of such programs, how they can best serve part-time students, and how to include culturally responsive practices while delivering core components as intended. A federal learning agenda could guide efforts by emphasizing the most policy-relevant research questions and marshaling the data along with research and evaluation expertise that exists across the country to help answer them.

Increasing college graduation rates, particularly for students that have been historically underserved by the higher education system, will require new governmental support for implementing programs backed by the strongest evidence available—and generating new evidence that can continue to inform and improve policy.

Kate Tromble is director of the Data Champions Collaborative at the Data Quality Campaign. Her work focuses on helping policymakers understand the role data and evidence can play in supporting people along their postsecondary and workforce journeys.