Cost Analysis of the Minnesota Subsidized and Transitional Employment Demonstration 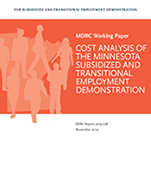 The Minnesota Subsidized and Transitional Employment Demonstration (MSTED) is testing the effectiveness of subsidized employment for individuals enrolled in the Minnesota Family Investment Program (MFIP), Minnesota’s Temporary Assistance for Needy Families program, who were unable to find employment after participating in the state’s existing welfare- to-work program. MFIP employment counselors, who work with adults expected to meet the federal work activity requirements while receiving cash benefits, referred individuals struggling to find employment to MSTED. MSTED placed participants into two different types of subsidized employment based on their job readiness: Participants who were less job ready were placed in temporary paid work experience in the nonprofit and public sectors, and participants who were more job ready were placed in subsidized jobs in the private sector designed to roll over into unsubsidized permanent positions. The primary goal of the program was to move participants into unsubsidized employment.

This paper presents the per-person cost of MSTED, as well as the costs of other services that all sample members may have received:

This study is part of a larger demonstration funded by the Administration for Children and Families in the U.S. Department of Health and Human Services, called the Subsidized and Transitional Employment Demonstration (STED), which is testing various subsidized employment strategies in several locations across the country. Longer-term findings from all STED random assignment evaluations are included in a separate synthesis report, while earlier findings discussing the implementation of MSTED and its early impacts are in a separate interim report.

The purpose of the cost study is to determine what it cost to provide MSTED services to a single program group member once MSTED had reached a steady state of operation. The analysis estimates the costs per sample member in three categories: MSTED costs, MFIP costs, and education and training costs.

The cost of MSTED was assessed using program expenditure reports, program survey data, and public data sources. The cost of MSTED program services were estimated by summing direct program expenditures and dividing by the number of program group members. To estimate the cost of MFIP services and education and training services, the research team first determined the unit cost, or the cost of serving one person for a specific unit of time (for example, one month). Multiplying the unit cost by the average length of time sample members received each service gives the average cost incurred per sample member.