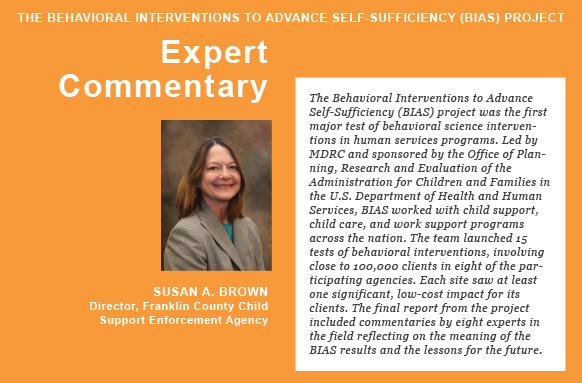 Susan A. Brown’s Expert Commentary, the seventh in the series, describes the involvement of staff at all levels in BIAS’s work in Franklin County, Ohio, as well as clients’ experiences with the intervention, and reflects on lessons learned (discussed in Chapter 5 of the final report).

Franklin County Child Support Enforcement Agency is a state-supervised, county-administered metropolitan child support program located in Columbus, Ohio. The Agency was pleased with the overall outcomes of the BIAS study, which improved the payment rates of parents who do not have wage withholding orders in Franklin County. As a result of the study, we learned that $350,000 more was collected from 13,095 parents in the intervention group than was collected from the control group. Any additional payment is meaningful from the perspective of the parents and children receiving these additional payments into their household. The BIAS team’s impact estimate, however, was not statistically significant.

The child support program is one of the most performance- and data-driven programs within human services. As such, and as the BIAS final report points out, the BIAS team was able to make substantial use of quantitative data that the Agency had available during the diagnosis phase, which increased the ability to home in on a very specific population of noncustodial parents.[1] Most data were obtained locally within the county; however, certain data for the project had to be derived from Ohio’s Support Enforcement Tracking System, which was more time-consuming.

Although the site implementation team consisted of managerial staff, the BIAS study in Franklin County provided the opportunity for staff members at every operational level of the organization to be truly involved. Their participation increased their acceptance of the behavioral concepts. The Agency initially held a meeting with the staff to introduce them to the field of behavioral economics, how it has been used in sectors of government and in the private sector for years, and what specifically the Agency was attempting to accomplish. Since the Agency did not have an automated way to fold, stuff, and seal the payment reminder letters used in the BIAS study, staff members mobilized to get the letters sent out to clients manually. Staff saw firsthand the behaviorally modified payment notices, so they felt like they were contributing to an overall effort to change the way they interact with families, and they began to understand Agency processes from the client’s point of view.

The Agency also heard from a fair number of clients who appreciated the reminders and the prepaid-postage return envelopes. Beyond that, Franklin County benefited from getting updated address information from many of the clients; explanations or reasons for nonpayment, such as medical issues; and updated employer information. The staff reported increased call volume from noncustodial parents who were involved in the study, who had long stopped communicating.

This pilot provided the Agency with a great deal more than the basics of behavioral diagnosis and design. It has contributed to the way we think about service delivery, our processes, and our clients. Franklin County has now taken behavioral economics to the next level by participating in the federal Office of Child Support Enforcement’s Behavioral Interventions in Child Support Services project. The Agency looks forward to reporting those findings.