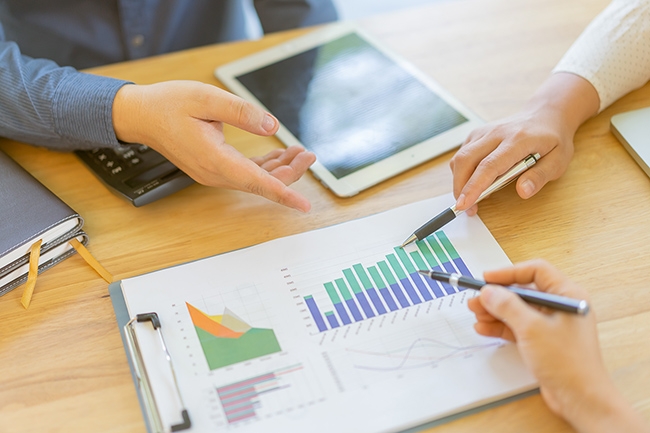 New student success interventions generate costs for colleges (for example, staff time and supplies). However, if they lead more students to remain enrolled, cause students to attempt more credits, and improve longer-term student outcomes, they can also generate tuition revenue and state funding (for public institutions in states that allocate funding based on enrollment, student outcomes, or both).

Forecasting the costs and revenues can help college administrators decide which interventions to adopt and to plan for financial sustainability.

Forecasts of the financial effect of a new intervention should be conducted from the college perspective.

College administrators are typically the ones who decide to adopt a new intervention and must plan for its financial sustainability. However, interventions that increase retention and degree attainment create economic benefits for students (such as higher incomes) and society (for example, greater tax revenue and less dependence on public assistance) that the college does not capture. Forecasts from the college perspective are not intended to address whether a new intervention generates more benefits than costs from the societal perspective. As such, a forecast from the college perspective that shows an intervention is unlikely to recoup all of its costs does not necessarily mean that the intervention should not be adopted, particularly at a public institution with a mission to advance the public good.

There are three components in forecasting the costs and revenues of a new intervention that apply to all postsecondary institutions:

State funding is also relevant for public institutions. Local funding may be relevant for community colleges, and auxiliary revenue is relevant for institutions that generate revenue from campus bookstores, campus housing, and dining services.

Calculating the costs and revenues resulting from a new intervention can be challenging for college administrators.

It can be particularly challenging for administrators at institutions that may not be able to invest significant resources in financial forecasting. It can be difficult to estimate the direct costs of a new intervention if previous studies of the intervention did not include a cost analysis or if a published cost analysis is not clear about the year and region on which the cost estimates are based. Estimating the indirect costs of an intervention requires a college to estimate its marginal costs per credit (how much it costs the college to deliver one additional credit), which can be tricky due to the mixture of fixed costs (costs that would be incurred regardless of the number of credits delivered) and variable costs (costs that increase as colleges deliver more credits). Estimating the tuition revenue generated by an intervention can be challenging due to institutional discounts (for example, scholarships awarded by the college) and a mixture of in-district/state and out-of-district/state students who may be paying different amounts. Last, estimating state funding can be complex because state funding models may reward multiple outcomes at different dollar amounts (for example, $2,000 per associate’s degree, $1,500 per transfer to a university, and $1,000 for a certificate), and because previous studies may not have estimated an intervention’s effects on the particular outcomes a state funding formula rewards, especially if those outcomes are in some way unconventional. State funding models also tend to change every 5 to 10 years, making projections of state funding uncertain.

Community college administrators MDRC has worked with have stated that they are aware of the components required for a forecast of an intervention’s costs and revenues, but it is rare for them to produce such forecasts due to the challenges involved in doing so. Of nine colleges that MDRC spoke with about forecasting an intervention’s costs and revenues, administrators at only two had ever attempted to produce such a forecast.

Research organizations have begun to develop tools to help colleges assess the costs and revenues associated with an intervention. HCM Strategists, rpk GROUP, the Institute for Higher Education Policy, and the American Council on Education have all developed a version of a “financial forecasting” or “return on investment” tool for interventions in the last five years. In the spring of 2022, MDRC launched its Intervention Return on Investment (ROI) Tool for community college administrators, the first such tool to include multiple interventions with estimated costs and effects on student outcomes already loaded; use rigorous effect estimates from randomized controlled trials; allow users to input their own interventions; cover community colleges nationwide; and be publicly available as a web application. For example, Figure 1 shows information generated by the ROI Tool on the costs and revenues associated with an intervention designed to encourage enrollment in summer courses, from the perspective of the Austin Community College District in Texas. While MDRC’s Intervention ROI Tool addresses many of the barriers described above for community colleges, it currently does not include universities or private, two-year institutions.

College administrators should become familiar with the process of forecasting intervention costs and revenues.

For example, administrators could learn how to adjust cost estimates based on inflation and regional prices and estimate their college’s marginal cost per credit, tuition revenue per credit, and marginal state funding per outcome (which may vary across institutions within the same state). Administrators of colleges in systems with funding models that include equity premiums (24 college systems each in the two- and four-year sectors as of fiscal year 2020) should also consider the financial effect of adopting interventions that target students whose improved outcomes can earn such premiums. If a college already has staff members responsible for the college’s overall financial forecasting (for example, in the office of the chief financial/business officer), it may make sense for such staff members to lead these efforts.

State policymakers should make it easier for colleges to forecast intervention costs and revenues.

For example, state policymakers could:

Researchers can also make it easier for colleges to forecast intervention costs and revenues.

For example, researchers can: 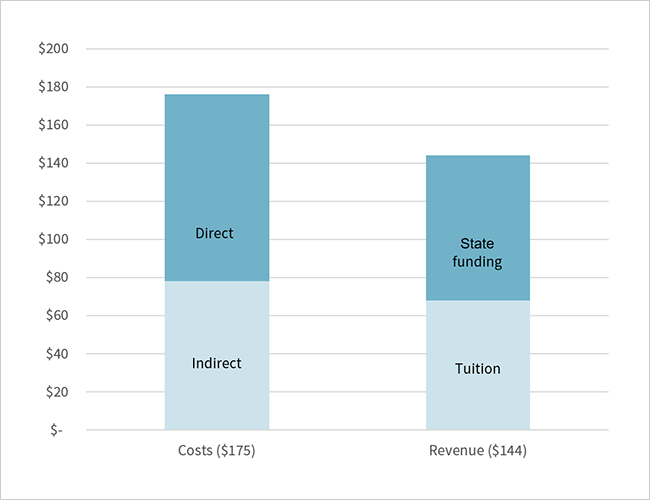 [1]Equity premiums are provisions in state funding models that award additional funding to colleges for the enrollment of or outcomes achieved by students in historically marginalized groups. Examples of historically marginalized groups that equity premiums may award additional funding for include students from low-income backgrounds, students of color, students from rural areas, and students who are required to take remedial courses.