Do Meta-Analyses Oversell the Longer-Term Effects of Programs? (Part 1)

The U.S. Department of Education’s What Works Clearinghouse (WWC) recently published a practice guide for educators on Effective Advising for Postsecondary Students. One recommended practice is to “transform advising to focus on the development of sustained, personalized relationships with individual students throughout their college career.” The evidence in support of this practice includes a meta-analysis showing that five programs using this approach increased postsecondary graduation rates by 0.29 standard deviations—around 13 percentage points—on average.[1]

We refer to this phenomenon—where longer-term follow-up data are available for a selected sample of studies among all studies of a class of interventions—as follow-up selection bias. We expect it will typically lead meta-analyses to overestimate longer-term effects for the range of interventions under consideration.

An Example with Some Great Data

We first present results from a meta-analytic data set of 30 randomized controlled trials (RCTs) of 39 postsecondary interventions, including over 65,000 students.[3] This data set, known as The Higher Education Randomized Controlled Trials or THE-RCT, is available to researchers through the Inter-university Consortium for Political and Social Research (ICPSR). All 30 RCTs were conducted by MDRC.

These RCTs range in size from about 900 students to 10,000 students and from 1 to 10 community college campuses. They tested diverse interventions ranging from low-intensity approaches such as informational messages that encouraged summer enrollment to comprehensive interventions such as the City University of New York’s Accelerated Study in Associate Programs (ASAP), which included support services (enhanced advising, tutoring, and career services), three forms of financial support (a tuition waiver, transportation passes, and free textbooks), and more. Although all studies followed students for one or two semesters, studies of only 12 of the 39 interventions include full-sample information on whether students graduated within six semesters. The average effect of these 12 interventions on graduation by the sixth semester after random assignment is 4.6 percentage points.

Figure 1 shows the distribution of effects on a short-term outcome for the studies that did not measure graduation for all sample members (labeled “No”) and the 12 that did (labeled “Yes”). The short-term outcome is the percentage of students who were enrolled in their second semester after random assignment. As can be seen, all the “Yes” studies have short-term estimated effects that are positive. In contrast, many of the “No” studies have short-term estimated effects that are null or negative. The weighted average estimated effect on second-semester enrollment is 4.4 percentage points for “Yes” studies but only 1.2 percentage points for “No” studies. This pattern could generate follow-up selection bias in a meta-analysis of longer-term intervention effects. 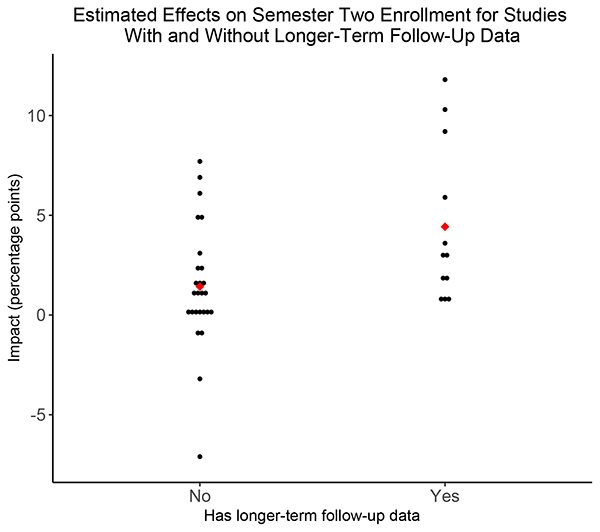 Returning to the What Works Clearinghouse Case 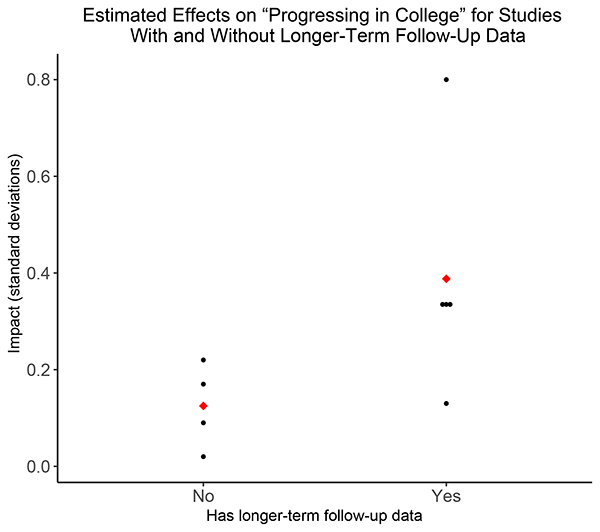 [4]For WWC’s definition of “progressing in college,” see page 8 of the WWC Review Protocol for the Practice Guide on Effective Advising for Postsecondary Students.