For many generations, education has been the path to upward social mobility. Today — as was discussed in the economic session of this colloquium — true mobility probably requires a college credential, or at least some postsecondary education.

In part this is true, Frank Levy argued, because of the rising importance of computerized work, which puts an increased emphasis on literacy — literacy in the deep sense of making sense of information by processing it in context. Computerization allows machines to fulfill any rote or repetitive task that can be completed using a standard operating procedure. That means that, for example, a bank teller’s job today requires much more literacy and problem solving than it did when a big part of the job was simply handing out and taking in cash. The more complicated problems are left for human beings.

This type of literacy starts very early in life. Recently, Levy said, education theorists have rediscovered the work conducted by Betty Hart and Todd Risley in the mid-1990s, which showed that children at different economic levels receive very different amounts of exposure to vocabulary before age 3, and that that variation is closely linked with how well they do in school. In fact, Ronald Ferguson noted, achievement gaps correlated with parents’ education and race open up between the ages of 1 and 2.

The worry for MDRC and others who care about the prospects of low-income and disadvantaged children, said Levy, is that computerized work does more than just increase the importance of education. By boosting the educational and economic advantages of educated parents, it, in turn, increases the economic and cultural advantages they can pass on to their children. That could lead to a much more rigid class system unless poorer children get the same shot at literacy that middle- and upper-class children take for granted. 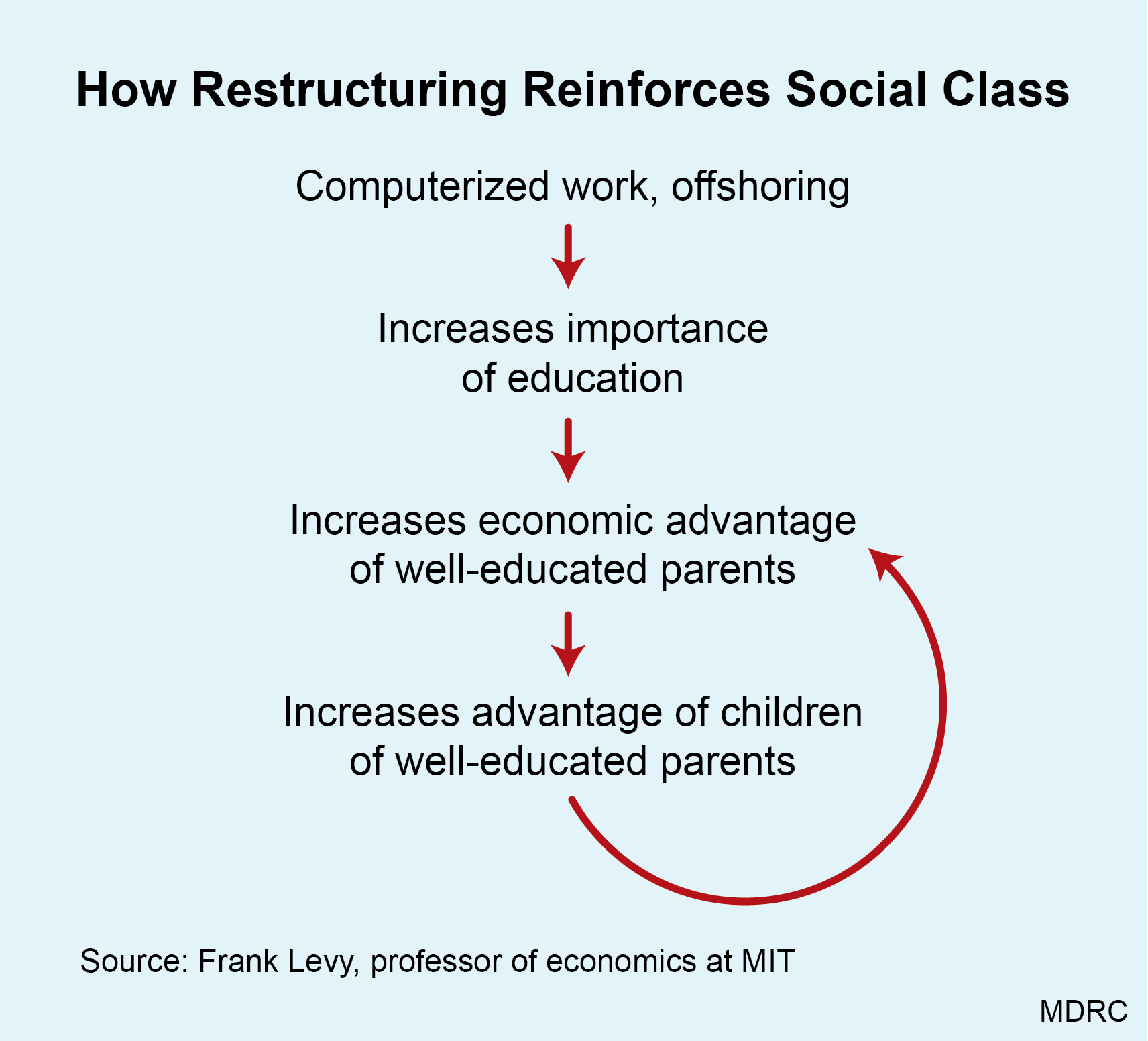 Ronald Ferguson suggested that to break this cycle it is necessary to reach parents early, and not only the ones who show up to site-based programs. He recommended a marketing-type approach that saturates communities with caregiving insights. He mentioned five such insights in particular: maximizing love and minimizing stress; talking, singing, and gesturing; using number games to lay a foundation for numeracy; encouraging and enabling spatial exploration; and reading to children frequently and discussing what is read.

MDRC is researching many ways to give all children a fairer chance at achieving this broader definition of literacy. The need for new approaches is all the more urgent since the national evaluation of the nation’s largest preschool program — Head Start — found only modest impacts that dissipated quickly once children entered elementary school. In Head Start CARES, MDRC is testing ways to improve children’s social and emotional development, to make it easier for them to learn. The study follows on the findings of the Chicago School Readiness Project, which found that such social and emotional improvements can significantly improve children’s preacademic skills. Making Pre-K Count aims to improve the math skills of children living in poverty. The Mother and Infant Home Visiting Program Evaluation (MIHOPE) is examining four different programs that intervene even earlier, sending home visitors to help low-income parents starting at around the time of a child’s birth.

Richard Murnane spoke about a later step toward postsecondary education: high school graduation. He cited estimates based on U.S. Census data showing that black and Hispanic students have significantly lower graduation rates than non-Hispanic whites — even as graduation rates have risen for all groups since 2000.

Why have graduation rates improved since 2000? Some evidence supports the idea that improvements in schooling for struggling students has helped, but Levy claimed that more evidence points to improvements outside of school. The proportion of all four-year-olds in preschool rose from one-third in 1980 to one-half in 2000, suggesting that more children may be arriving in school ready to learn. The birth rate among 15- to 17-year-old girls decreased by 44 percent from 1990 to 2008, and even more among African-American girls, which  suggests that fewer girls have had to drop out of school to care for children. In addition, fewer of their own children have arrived in school, where the children of young, single mothers tend to do poorly. Finally, the arrest rate among teenagers for violence-related offenses declined by 47 percent between 1994 and 2009.

Ronald Ferguson spoke about what his work has revealed to be effective inside the classroom. From 2009 to 2013, the Gates Foundation’s Measures of Effective Teaching project measured 3,000 classrooms in multiple ways. The final report examined the extent to which standardized test scores measuring value-added achievement correlated with classroom observations and student surveys. They did correlate well, with student surveys being the most reliable.

The student surveys were ones Ferguson has developed over the past decade. They measure the “Seven C’s” of effective teaching, five under the heading “academic support” and two under the heading of “academic press.” The “support” measures are gathered under the categories of Care, Confer, Captivate, Clarify, and Consolidate. The “press” measures are those in the categories of Challenge and Control: whether teachers challenge students to think rigorously when they get confused, persist in the face of difficulty, and understand material, not merely memorize it; and whether their classrooms are characterized by good behavior and order. Control, Challenge, and Clarify survey results predict value-added achievement gains the best. That is, students make the most progress on tests in orderly classrooms where their teachers challenge them to persist and think rigorously and can clear up their confusion. On the other hand, “my teacher inspires me to want to go to college” is predicted almost entirely by “support” measures, in particular Captivate and Care. All seven of the C’s affect outcomes educators care about.

MDRC has conducted studies of several strategies that have shown promise in increasing graduation rates for groups that still lag behind. Talent Development, for example, focused on ninth-graders, because about a third of low-income, black, and Hispanic students fail to progress from the ninth to the tenth grade on time, and fewer than 30 percent of students held back in the ninth grade graduate within 6 years. Levy noted that at least at the original sites, for the original cohorts, Talent Development did lead to an increase in graduation rates. The Small Schools of Choice MDRC has evaluated in New York City have also increased the high school graduation rates of low-income students by 9 percentage points. The Quantum Opportunity Program has shown significant increases in 5-year high school graduation rates and college enrollment (although the control group in that study caught up to the program group at the 10-year mark). Finally, while the original Career Academies did not increase high school graduation rates (in part because the control group had high graduation rates), they did lead to dramatic increases in career earnings 8 years after graduation, particularly for young men.

For those who drop out of high school, MDRC and others have studied several ways to improve the experience of preparing for the GED. Members of the program group in the evaluation of the National Guard Youth ChalleNGe were much more likely than those in the control group to have obtained a GED certificate or a high school diploma and to have earned college credits. They were more likely to be employed, and they earned about 20 percent more than their control group counterparts. Members of the program group in the evaluation of Job Corps were significantly more likely to earn GED certificates or trade credentials. Older members of the program group (those between the ages of 20 and 24) also saw long-term increases in their employment and earnings. The GED Bridge to Health and Business program at LaGuardia Community College doubled the rate at which students passed the GED exam and tripled the rate at which they enrolled in college.

Cecilia Rouse spoke about what happens once students do reach college and identified three major problems. First, although the rate of enrollment in some form of postsecondary education has risen from 45 percent of high school graduates in 1960 to 70 percent today, data from the Beginning Postsecondary Students Longitudinal Study show that 50 percent of those students do not receive a degree within six years. Among students who start at two-year institutions, about two-thirds have no degree after six years.

Second, the price of college for students is high and continuing to rise, largely due to shifts in who pays that price. In 1980, states paid about 44 percent of the costs of attending public institutions, and by 2009 they paid only 22 percent. That shift in costs has led to the third problem: students taking on increasing levels of debt.

The overall question, therefore, is whether it is possible to preserve access to college and increase the rate of college completion, all while making college more affordable. To address the cost issue, many institutions are turning to technology. Two good randomized analyses of technology-assisted education have been conducted in four-year institutions with entry-level courses such as statistics or economics. Those studies found that on average, students did about the same in online classes or hybrid classes (where students studied online part of the time and spent part of the time with a teacher). Some meta-analyses have reached the same conclusion.

One of the studies, however, found disparities in impact: students who were less prepared for college did less well, as did lower-income students and Hispanic men. Rouse said she was concerned that technology-based education could worsen the cycle of inequality Frank Levy described. Online education takes a great deal of decision-making power and self-regulation compared with the automatic discipline and regulation inherent in being in a classroom at a certain time. Unequal broadband internet access could also end up exacerbating class and racial gaps.

Apart from these two studies the research base of rigorous studies is thin. There have been over 1,000 studies of online education, of which 51 were quasi-experimental. Twenty-eight had comparison groups, and only 16 were randomized.

Many studies have been conducted on ways to help postsecondary students succeed. For example, the Performance-Based Scholarship Demonstration and Aid Like A Paycheck both use financial incentives to encourage students to stay enrolled in college and succeed there. Interim results on performance-based scholarships suggest that these programs do improve students’ performance and increase the number of credits they earn. In some states where data are available, they also appear to reduce student debt. Accelerated Study in Associate Programs focuses on community college students who need developmental (or remedial) courses when they arrive in college. Two-year results from that evaluation show that the program boosted two-year graduation rates by 66 percent.