An Earned Income Tax Credit That Works for Singles

Final Impact Findings from the Paycheck Plus Demonstration in Atlanta 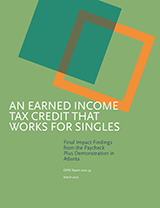 Low-wage work, particularly in service sector industries, offers only precarious security for its workforce. This reflects decades of rising wage inequality, with rising wages for workers in high-paying jobs and stagnant or falling wages for workers earning low wages. Recently, the COVID-19 pandemic further exposed this tenuous situation for people working in retail, recreation, and food services, and for essential workers in grocery stores and hospitals.

The Earned Income Tax Credit (EITC), one of the federal government’s largest antipoverty programs, has lifted millions of people out of severe poverty. It provides a refundable credit at tax time to eligible workers with low incomes. An extensive research base demonstrates its effectiveness, and it has gained bipartisan support from policymakers for both its antipoverty and pro-work effects. However, the credit provides only a very small refund for single workers with no qualifying children.

Paycheck Plus is a test of an EITC expansion for workers with low incomes who have no dependent children. Paycheck Plus offered those workers a credit, , referred to in the program as a bonus, of up to $2,000 at tax time and extended benefits to eligible workers earning up to $30,000 per year, twice the maximum income limit of the federal EITC. This report presents findings through three years of the project’s work in Atlanta. Between late 2015 and early 2016, about 4,000 single adults with low incomes were recruited to take part in the study. Half of them were selected at random to be eligible for the Paycheck Plus bonus for three years, starting with the 2017 tax season, and running through 2019.

Would a more generous refundable tax credit increase the after-tax income of workers with low incomes and no children, much as it has done for workers with children?

What effects would a more generous EITC have on employment and earnings? Would it have unintended negative effects, or would it increase work effort, especially among harder-to-employ populations such as people with criminal justice histories and those with child support orders?

How difficult would it be to reach and engage workers with low incomes and no child dependents? Would additional support be needed to help people without jobs find employment so they can receive the more generous EITC benefit?

Paycheck Plus was tested in Atlanta to add to the evidence of how an expanded EITC might work in a context different from that of New York City, where the program ran from 2014 through 2017. The Atlanta study assessed take-up rates (the percentage of eligible adults who applied for and received the bonus) and program’s effects on employment, earnings, and income over three years. The goal is to use the findings from both cities to inform consideration—whether federal or state and local—of tax credit amounts for workers without dependent children.

About 45 percent of the program group members who were eligible for a bonus received one in the third year of the program. Among those who received bonuses in Year 3, the average amount was $1,296. Lower tax-filing rates among individuals with very low earnings who are not required to file taxes may account for the high proportion of individuals who were eligible for the Paycheck Plus bonus but did not receive it. The bonus eligibility rate of 57 percent (based on 2018 earnings) was slightly lower in the third year of the program than in the two years because some people stopped working and others earned more than $30,000.

The final year of the program was affected by many operational challenges, including reaching eligible participants to encourage them to apply for the bonus. Paycheck Plus Atlanta’s operating capacity also shrank substantially in its final year, driven by cutbacks in United Way’s Volunteer Income Tax Assistance (VITA) program, an important operational program partner. (VITA programs offer free tax help to individuals who earned under $57,000 in the past year.) Challenges included reductions in the number of VITA locations and reduced VITA staff capacity. Staff members also reported many instances of outdated contact information, participants forgetting about Paycheck Plus, and participants misunderstanding the eligibility requirements for the bonus payments. These challenges were exacerbated by Atlanta participants’ fewer initial connections to the VITA program than the New York participants had.

Paycheck Plus led to a large and sustained increase in tax filing rates, and particularly in the use of VITA sites to file taxes. In the third year of the program, 44 percent of the control group filed their taxes. Paycheck Plus increased the filing rate by 9 percentage points, sustaining the impacts from the first two years of the program. Additionally, the program produced a nearly fivefold increase in filing taxes at a VITA site—in Year 3, only 4 percent of control group members filed their taxes at a VITA site, compared with more than 20 percent of program group members.

The Atlanta study did not measure effects on other secondary outcomes, including family formation, criminal justice involvement, and health status.

Between October 2015 and April 2016, the project recruited approximately 4,000 single adults without dependent children to take part in the study. Individuals were eligible if they were not married, had a valid Social Security number, were not planning to claim a dependent child on their taxes in the subsequent year, were between the ages of 21 and 64, earned less than $30,000 in the prior year, and were not receiving or applying for Supplemental Security Income or Social Security Disability Insurance. Once eligible individuals agreed to participate, half of them were assigned at random to a group eligible for Paycheck Plus and half were assigned to a group not eligible for the program but still eligible for existing tax credits. Individuals assigned to the Paycheck Plus group were given a brief explanation of the bonus on a take-home sheet. The effects of the Paycheck Plus offer were estimated by comparing the full program group, including those who did not receive bonuses, with the full control group. Data used for the study include basic demographic and background data collected from all study participants before study entry, unemployment insurance wage records from the Georgia Department of Labor, tax records from the Internal Revenue Service, and child support payment records from the Division of Child Support Services at the Georgia Department of Human Services.

A Synthesis of Findings from the Paycheck Plus Demonstration