The Elegant Simplicity (and Potential Pitfalls) of Simple Frameworks 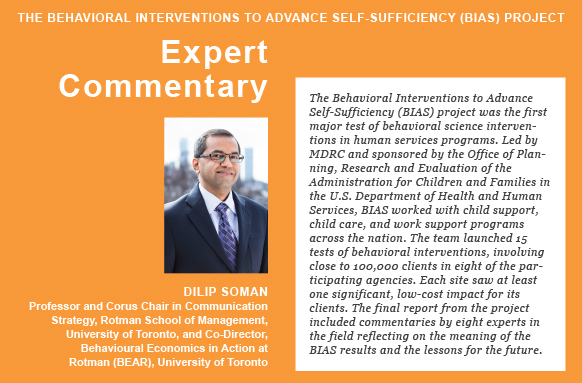 In this Expert Commentary, the fifth in the series, Dilip Soman looks at the pros and cons of using heuristics in general and the “SIMPLER” framework in particular (discussed in Chapter 4 of the BIAS final report), which was developed by BIAS to guide practitioners in their efforts to improve human services programs.

Chapter 4 of the final BIAS report presents a framework that abstracts the findings from several BIAS tests and provides a mnemonic to summarize the seven principles of successful behavioral interventions.[1] The framework is elegant and catchy, and I applaud the BIAS team for their effort in creating it. For a casual reader of the report, SIMPLER — illustrated in the accompanying figure — is a handy heuristic to remember that there are seven types of interventions that helped BIAS research teams tackle the myriad of bottlenecks that they encountered in encouraging behavior change — social influence, implementation prompts, making deadlines, personalization, loss aversion, ease (of materials and processes), and reminders. This mnemonic builds on and complements the “EAST” (Easy, Attractive, Social, and Timely) framework that the U.K. Behavioural Insights Team has developed and that has proven to be the basis for several successful projects completed by the team as well as many others.[2] 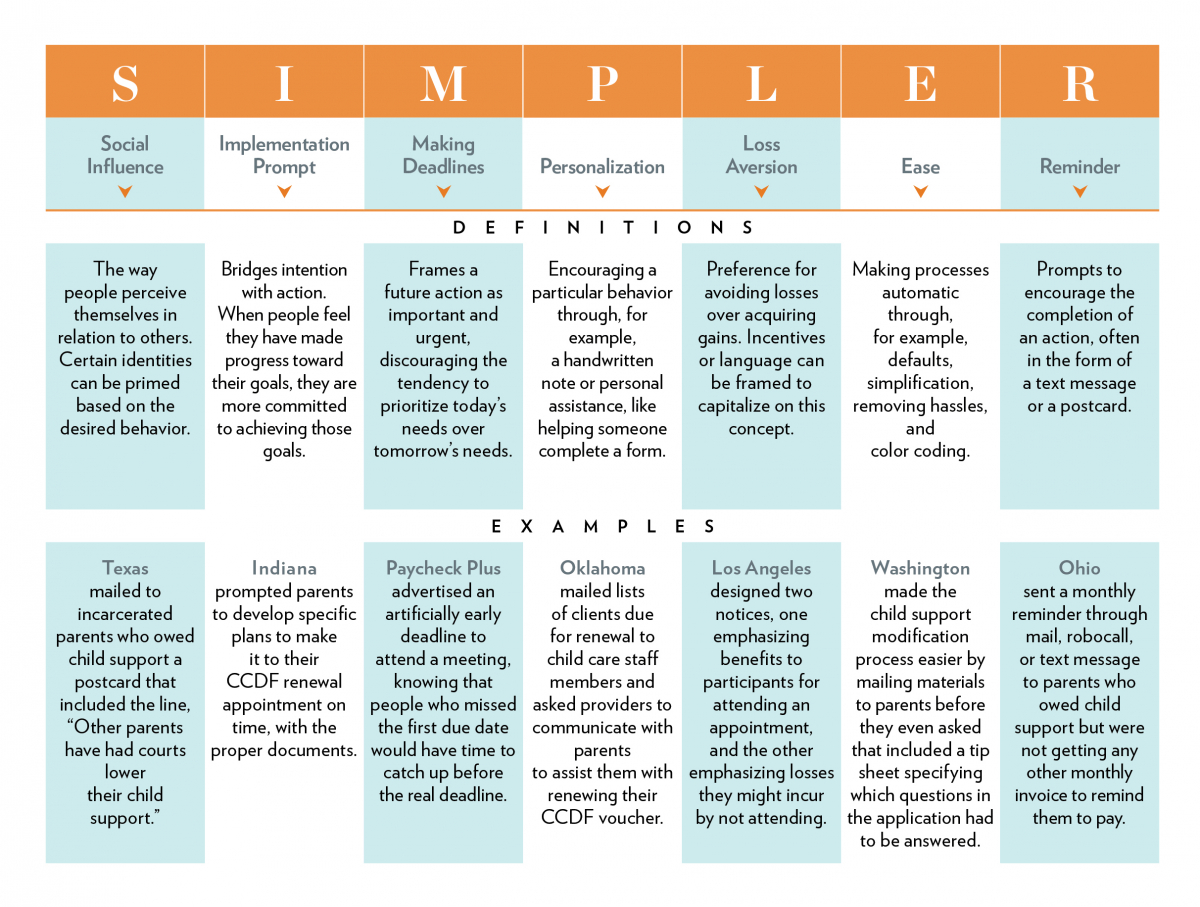 Frameworks like SIMPLER and EAST are useful in many ways, in particular because they provide a heuristic in the form of a simple set of guidelines that the relatively inexperienced practitioner could apply to a given behavioral change situation. We know from the literature that while heuristics represent a simplified approach to any decision-making process, they are also functional in many ways — they allow for quick judgments and decisions, thereby making decisions more efficient, and can be used without a deep understanding of the underlying science.[3] In addition, mnemonic heuristics like SIMPLER have the added benefit of providing a good vocabulary for the relatively uninitiated practitioner to use in learning a new set of skills. In particular, SIMPLER will likely not only have good advertising value (in that it is catchy and is easy to remember) but could also be used as the basis for training programs and workshops. Finally, these heuristic frameworks serve as a good diagnostic tool to allow a behavioral scientist who is auditing a particular process to get started with diagnosing and identifying potential bottlenecks. In sum, SIMPLER is an invaluable descriptive framework.

Yet, research also suggests that heuristics could sometimes backfire and that there are dangers in using descriptive frameworks in a prescriptive manner without a careful study of the underlying context.[4] While heuristics are functional in stable environments, they could lead the user astray in environments that are structurally different (that is, where the background variables are fundamentally different), noisy (for instance, where the relationships between variables change across contexts), or dynamic (where, for example, these relationships change with time). In particular, research shows that heuristics that are learned in one set of domains could backfire spectacularly in others. For instance, a 2007 study documented the “duration” heuristic — the belief that the longer the duration of a service experience, the more value it provides to the end user.[5] This heuristic could be learned in several consumption domains — longer massages are better than shorter ones, more time spent by a cleaning service usually results in a cleaner home, and so on. However, individuals often misapply this heuristic in other domains, resulting in poor evaluations and choices. For instance, in situations where a service provider works toward a concrete goal (and therefore efficiency might be the more relevant yardstick), the opposite relationship between time and quality is true. A locksmith who opens a lock quickly and a dentist who completes a painful drilling procedure sooner should be preferred — but are often not — over their slower counterparts.[6]

One word of caution to practitioners who are lured by the elegance of the SIMPLER heuristic is this: before applying the framework, it is critical to spend some time in diagnosing the context in which the end user is making decisions and judging whether the context is similar to the BIAS projects on which the framework is based. Many of the projects described in the BIAS final report involve behavior changes of individuals in an informationally dense and logistically challenging environment. In this context, it is easy to see that the various elements of SIMPLER are designed to increase motivation, simplify information, and reduce the logistic burden on the end user. Whether SIMPLER would work as a prescriptive heuristic in other domains — say, with expert end users who don’t have enough time to do the necessary paperwork — is another question. Perhaps the next calling for behavioral architects, then, is to develop more nuanced frameworks that are not just descriptive, but potentially also prescriptive in a given set of contexts.

In closing, I believe that the SIMPLER framework provides both the behavioral scientist and the practitioner with immense value if applied appropriately. As a community of behavioral scientists, there are three things we should do to ensure that the results from projects like BIAS convert into generalizable insights: