InPractice: Lessons for and from Practitioners 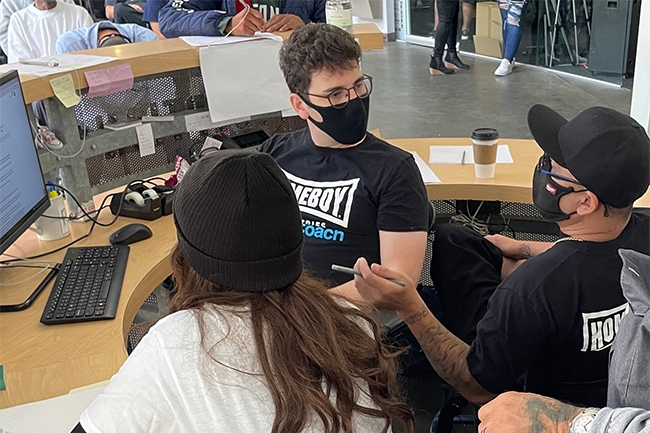 Improving an organization’s technology and data collection capacity can yield many benefits. That has been the case for Homeboy Industries (HBI), whose experience implementing a new data system was described in an earlier InPractice post. But there are complexities and challenges that must be addressed before a successful implementation can take place. This post explores how HBI, one of the largest gang rehabilitation and reentry social service programs in the world, managed that change process.

Here are five principles that organizations may want to consider when launching a new system to ensure that everyone is onboard and prepared for the rollout and that client data can be collected and used effectively by the entire staff.

HBI provides comprehensive services to individuals in Los Angeles County who were previously gang-involved or incarcerated. The organization’s model and open-door culture focus on building strong relationships with clients and allowing them to determine their own needs and goals. HBI offers a wide range of services such as tattoo removal, workforce development, substance abuse treatment, and mental health care. The organization enrolled more than 3,000 clients in its job training and other program services in 2020.

As discussed in the first blog post, HBI wanted to implement a new client management information system (MIS) to better support its staff members and inform funders about program achievements. But HBI leaders knew that integrating the new MIS was going to be a challenge, given the complexity of the organization’s client-driven program model and the inadequate existing data infrastructure. At the same time, changing practices around data use can require a significant shift in staff behavior and perceptions. That was especially true for HBI, which eschews a one-size-fits-all approach to case management. HBI and its data partner, Care4, had to handle the transition to the new MIS in a way that would bring staff members along as willing partners and ensure that both the system and the process of change itself were responsive to staff needs and concerns.

HBI staff members had valid reasons for being concerned about implementing new technology. A common theme emerged in discussions with MDRC, which recently collaborated with the organization on a project to assess its data collection needs and practices: An increased reliance on technology might undermine rather than support the strengths of staff members’ approach with clients. HBI’s old data system, for example, was neither dynamic nor user-friendly enough to help the staff make time-sensitive decisions, easily track a client’s passage through the organization, or make sense of larger trends. Staff members also worried that in an organizational culture that prioritized face time with clients, an increased focus on data could distract from that priority because it would require case managers to spend valuable time at their computers doing data entry after talking to a client, rather than moving on to meet with the next one.

It wasn’t that the staff was opposed to using new tools that would help them meet their clients’ needs. To the contrary, in discussions with MDRC, staff members frequently expressed the desire to be able to use data to help them manage their work better, coordinate across departments, and ensure that HBI clients received the best care possible. But given the current system’s limitations, the staff simply did not see it as being integral to their ability to do their jobs or to achieve the organization’s larger mission.

Previously HBI had relied on a handful of staff members with technology expertise to make decisions about data use for the entire organization. But implementing a substantial new MIS across multiple departments would require a different approach if teams throughout the organization were to understand and embrace the change. HBI and Care4 brought the staff into the conversation early on, meeting with case managers twice a week over a period of months to document and streamline their processes and to get collective agreement on the sequence of their activities and the corresponding collection of information. Armed with that intel, Care4’s program developers set out to customize their platform to address HBI’s specific needs. For example, the MIS can now store medical files for HBI’s tattoo removal department, replacing a burdensome physical file system. In addition, the Care4 team started work on bringing at least some functionalities of the Care4 system to tablets and phones, based on feedback from HBI case managers, who said they often spent significant portions of the workday away from their desktop computers.

Adopting a new data system requires attention to staff learning and development as well as to training strategies that address each person’s comfort level with technology. At HBI, staff members come from diverse backgrounds, including many trainees and some staff members who were former clients of the program and who may have no formal training in technology. To help build staff members’ confidence, each department nominated coaches who could demonstrate the new MIS to others in the department and support their use of it on an ongoing basis. HBI is also planning training videos that will feature various staff members using the Care4 system, to further emphasize that it is used for and by the HBI community. In addition, the organization has begun to adjust its onboarding process and is making learning the Care4 technology a central component of the training and coaching of new hires.

Adopting a new system allowed HBI and Care4 to foster a culture of learning—informing team decisions and sharing knowledge to influence the broader field. Now, HBI staff members across departments can communicate with each other within the Care4 MIS by leaving comments in client files and creating task notifications for members of other departments, actions that used to require separate emails or offline communications. To help staff learn about what works for clients over time, HBI is also beginning to integrate new surveys to help measure the social and emotional development of their clients, which formerly was hard to document in a quantifiable way due to the limitations of the prior system. In 2021 HBI leaders worked with a national coalition at Common Justice, an alternative-to-incarceration and victim-services organization, to develop and begin piloting a way to measure psychological healing. Ultimately, this ability to measure change more carefully will allow Homeboy staff members to learn what is working and share knowledge across their organization, with peer organizations, and with other stakeholders.

5. Be Willing to Adapt

Flexibility was another key to a smooth implementation process. For example, HBI originally planned to customize and roll out Care4 one department at a time; the Care4 team thought this approach would help the organization ease into using and learning the system. But the HBI team responsible for launching the new technology began to recognize the value of implementing Care4 program-wide: It would help tear down some of the silos that had developed among departments over time. The team was also concerned about the burden a staggered rollout would place on staff if they had to operate two systems simultaneously, especially given the desire to streamline information sharing across the organization. As a result, Care4 agreed to change its rollout plan and get most of the system ready to launch across departments at one time.

Change is unpredictable, and organizations will encounter hurdles along the way as they dive into a change process. By knowing to expect the unexpected, stakeholders will be less discouraged by the challenges that may arise along the way.