A Feasibility Study of the Bridges to Pathways Program 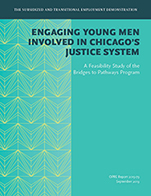 This report presents findings from a feasibility evaluation of the Bridges to Pathways (Bridges) program. Bridges was a program for young men in Chicago between the ages of 17 and 21 years who were involved with the criminal or juvenile justice system and lacked a high school credential. The program offered intensive mentoring and case management, as well as the opportunity to earn a high school credential, attend social-emotional learning workshops, and participate in a subsidized internship.

The Bridges evaluation is a part of the larger Subsidized and Transitional Employment Demonstration, funded by the Office of Planning, Research, and Evaluation, Administration for Children and Families, in the U.S. Department of Health and Human Services. The Bridges program was launched in 2013, and the evaluation of this developing program builds knowledge about operating this model and its potential to achieve its intended effects: to help participants attain a high school credential, obtain unsubsidized employment, and reduce their involvement with the criminal justice system. Designed as a feasibility assessment, the evaluation includes an implementation study and a small-scale randomized controlled trial.

The Bridges evaluation enrolled 480 young people between June 2015 and July 2016. This report provides a detailed description of the Bridges model and how the program providers adapted the model. It also presents findings about whether the program improved young people’s outcomes and decreased criminal activity during the first year after study enrollment. The implementation study concluded that the program succeeded in enrolling a high-risk population, and it focused its services on keeping participants engaged with the program and removing barriers to their participation. An analysis of the program’s impacts indicates that the program reduced the rate of arrest for felony crimes, and that it also reduced the rate of arrest for violent crimes. However, the program had no impact on the overall rate of arrest or incarceration. It also had no impact on educational or training certification and no sustained effect on employment. Overall, the evaluation indicates that the Bridges model shows promise to help decrease violence among high-risk young men. However, more information will be needed to understand the ability of programs such as Bridges to make a difference in the lives of the young people they serve.

Bridges is a violence prevention program that aims to reduce the likelihood that young adults at high risk of violence will engage in criminal activity. Originally launched in 2013, Bridges closed in 2016 and was revamped in 2017. MDRC evaluated the original Bridges program to determine whether it showed promise for improving the outcomes of the young people it was intended to serve.

The evaluation also included a small-scale random assignment study. Individuals who were eligible for and interested in Bridges were randomly assigned to either a program group, which was offered Bridges services, or to a control group, which was not offered those services. The study provides preliminary evidence about the program’s potential to improve short-term outcomes on education, employment, and recidivism. Key data sources included administrative records on involvement in the criminal justice system and records on employment and earnings, as well as a follow-up survey.

The Bridges evaluation seeks to answer the following questions:

The program reduced the rate of arrest for felony crimes by 8 percentage points. Participants were also significantly less likely to be arrested for a violent crime. However, the program had no impacts on the overall rate of arrest or incarceration.