Interim Findings from the Paycheck Plus Demonstration in New York City 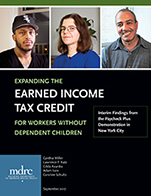 In recent decades, wage inequality in the United States has increased and real wages for less-skilled workers have declined. As a result, many American workers are unable to adequately support their families through work, even working full time. The Earned Income Tax Credit (EITC) has helped to counter this trend and has become one of the nation’s most effective antipoverty policies. But most of its benefits have gone to workers with children. The maximum credit available to workers without dependent children is just over $500, and workers lose eligibility entirely once their annual earnings reach $15,000.

There has been bipartisan support for expanding the EITC for this group of workers. Paycheck Plus is a test of that idea. The program, which provides a bonus of up to $2,000 at tax time, is being evaluated using a randomized controlled trial in two major American cities: New York City and Atlanta, Georgia. This report presents interim findings from the test of Paycheck Plus in New York City. Between September 2013 and February 2014, the project in New York recruited just over 6,000 low-income, single adults without dependent children to take part in the study. Half of them were selected at random to be offered a Paycheck Plus bonus for three years, starting with the 2015 tax season.

The program sought to mirror the process by which filers apply for the federal EITC, even though the bonus was not administered by the Internal Revenue Service. Participants needed to apply for each bonus, and receipt of it was not automatic with tax filing.

These findings are consistent with research on the federal EITC showing that an expanded credit can increase after-transfer income and encourage employment without creating work disincentives. Later reports will examine effects after three years on income, work, and other measures of well-being, in both New York City and Atlanta.

Frequently Asked Questions About the Interim Findings from Paycheck Plus