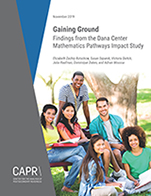 Analyses of literacy and numeracy levels worldwide by the Organisation for Economic Cooperation and Development suggest that the U.S. population has one of the lowest numeracy levels among industrialized nations. Although education leaders and math experts have recognized this problem for years and sought to address it, many people in the United States continue to struggle with learning math. While postsecondary schools have sought to prepare incoming students for college-level math with a curriculum known as developmental or remedial math, however, the problem has persisted. Schools require large proportions of entering college students to take these courses, which can take multiple semesters to complete. And far too few of these students ever successfully complete them. As a result, many practitioners and policymakers focused on improving developmental math courses by shortening the course sequences that students are required to take or streamlining the content in an effort to get students into college-level courses more quickly. Nevertheless, to date, few reforms have focused on changing the type of math that students learn and how they learn it.

To meet this challenge, the Charles A. Dana Center at the University of Texas at Austin developed the Dana Center Math Pathways (DCMP), which diversifies the math course content that students take so it better aligns with their career interests. The Dana Center also developed curricula for three math pathways, which revise the content and instruction in developmental and college-level math classes while also streamlining the typical two-semester developmental math series into one semester. Starting in 2014, researchers from the Center for the Analysis of Postsecondary Readiness — a partnership between the Community College Research Center at Teachers College, Columbia University, and MDRC, as well as research scholars from several universities — began studying the DCMP curricular models using a randomized controlled trial at four Texas community colleges. This report analyzes the implementation of the curricular models at the institutional and classroom levels and the contrast of the new models with traditional developmental and college-level math classes, the impact of the DCMP on students’ academic outcomes for up to four semesters, and the DCMP’s costs compared with colleges’ standard course pathways.

Overall, the study found that the four Texas colleges revised many institutional policies, enabling them to implement the DCMP and offer DCMP courses to many more students than was done before the study. Virtually all DCMP developmental and college-level courses remained faithful to the DCMP’s revised curricular and pedagogical design, which contrasted sharply with colleges’ standard developmental course offerings and college-level algebra courses. However, colleges experienced some challenges, such as targeting all students who were eligible for the DCMP and aligning the new math policies with requirements of four-year colleges to which their students were likely to transfer.

After three semesters, the DCMP had a positive impact on students’ completion of the developmental math sequence, increasing their likelihood of taking and passing college-level math and the number of math credits earned. Researchers also saw a small impact on early cohorts’ attainment of a certificate. They found no impacts on overall credit accumulation or on receipt of an associate’s degree or transfer to a four-year college, although it was unlikely to see such impacts in so short a time. The study found that both start-up costs and net ongoing direct costs to the colleges from the DCMP are fairly low, although the colleges also received many supports from the Dana Center that are not included in these estimates.

Findings from a National Survey and Interviews with Postsecondary Institutions