Going Big for Little Kids: Why Kindergarten is Critical in the COVID-19 Recovery | MDRC
Skip to main content

Going Big for Little Kids: Why Kindergarten is Critical in the COVID-19 Recovery 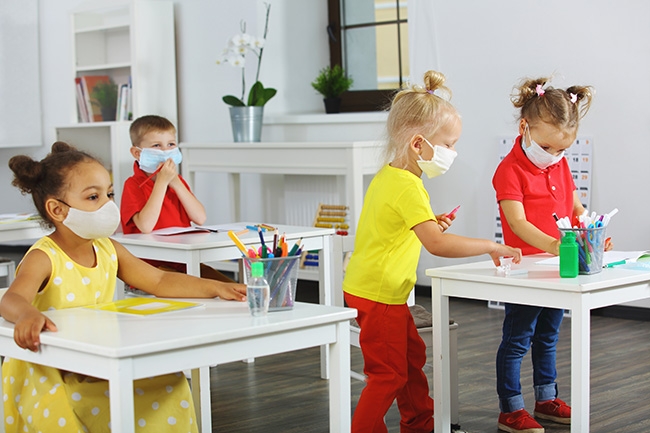 This commentary was originally posted in the New America Early and Elementary Update.

Congress is currently debating how much additional funding to give to struggling pre-K providers and elementary schools as part of a new coronavirus relief package. Current proposals primarily focus on support to keep early childhood programs open, to help public schools reopen, and to aid public schools with older students’ learning recovery. What gets overlooked in these discussions is the importance of investing in high-quality learning opportunities for young children during early childhood and in kindergarten. Reports from districts around the country show historically low enrollment in pre-K programs—particularly among economically disadvantaged families—and a 16 percent drop in kindergarten enrollment on average for the 2020-21 school year. More now than ever before, there is a critical need to invest in high-quality early childhood and kindergarten programs that set students up for long-term success.

Kindergarten is an instrumental year for children

There is a large body of research examining pre-K programs for four-year-olds and their effects on children’s development as they move through kindergarten and into later elementary school. Some of these studies have found that the positive effects of pre-K on children’s academic and cognitive skills can dissipate fairly quickly, a phenomenon often described as “fadeout.” However, a more accurate description is “convergence,” because a closer examination shows that children who do not attend pre-K catch up to their peers during kindergarten and the early elementary school grades. Yet, few studies have fully explored how kindergarten contributes to these convergence effects.

We conducted research in partnership with the Boston Public Schools (BPS) Department of Early Childhood before the pandemic, which found that kindergarten is a critical setting for supporting young children’s learning and development. Our team recently published two studies in Child Development examining associations between enrollment in the BPS prekindergarten program—a model that pairs two evidence-based curricula with teacher training and coaching, implemented in public school settings—and children’s academic and cognitive outcomes.

In the first study, conducted with nearly 5,000 applicants to the BPS prekindergarten program, we found that as much as 61 percent of the convergence in literacy skills between program enrollees and non-enrollees occurred in kindergarten when children were followed through third grade.

Kindergarten can be strengthened in five ways

Given major disruptions to both pre-K programs and K-12 systems because of the pandemic, children will be starting kindergarten with a wider range of incoming skills and prior early learning experiences than teachers are used to. Students will require increased supports for differentiated instruction. Investing in kindergarten specifically will help young students meet their full learning potential. Here are five research-backed, equity-centered investments state and district leaders can make as the country recovers from the pandemic in the coming years:

As the country emerges from the pandemic and continues to face challenges to supporting children’s early learning, policymakers should not forget about the lessons learned during this crisis. In addition to supporting continued expansion of high-quality early care and education, further focus on early childhood and kindergarten stands to make a crucial return on investment for our youngest learners.

Meghan McCormick is a research associate in MDRC’s Family Well-Being and Children’s Development policy area, and Christina Weiland is an associate professor at the School of Education at the University of Michigan.