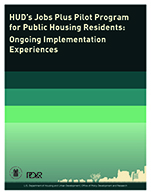 Households receiving federal rental subsidies face major impediments to achieving self-sufficiency, including poor work histories, limited education, and significant personal and other challenges. To help address the issues of low-wage work and the concentration of poverty and joblessness in public housing communities, the U.S. Department of Housing and Urban Development (HUD) and MDRC conceived Jobs Plus in the mid-1990s. The model encourages economic mobility by providing employment-related services, rent-based work incentives (so that initial earnings increases do not trigger immediate rent increases), and building a community context that supports work (called “Community Support for Work” in Jobs Plus).

The original demonstration (1998 to 2003) found that the Jobs Plus housing developments that fully implemented all the components — that is, they offered the full package of Jobs Plus employment services, rent-based work incentives, and Community Support for Work — saw the program boost annual earnings. Building on the work by the East River Development Alliance (now Urban Upbound), a community organization in Queens, New York, to adapt Jobs Plus for Queensbridge Houses, the City of New York replicated Jobs Plus, initially at a public housing development in East Harlem, and later in the Bronx as part of a Social Innovation Fund initiative that also included San Antonio, Texas. New York City has since expanded the program to 26 developments. In 2015, the program became part of federal housing policy when Congress authorized $24 million for the Jobs Plus Pilot Program, targeting public housing developments with a minimum of 250 nonelderly households. To date, HUD has awarded about $76 million to 31 public housing agencies (PHAs) to operate Jobs Plus. Through four-year grants, housing agencies were provided resources to implement the Jobs Plus model and to develop locally based approaches to increase earnings and advance employment outcomes for public housing families.

This report, the second for this evaluation, focuses on the implementation experiences of eight of the nine sites, through early 2018, about midway through the grant. It examines how program operations evolved over time, the types of implementation issues that continued to be challenging, the strategies devised to address them, resident participation levels, and the technical assistance and guidance that sites received to implement this complex initiative. Also covered is site leaders’ early thinking about program sustainability, given that their four-year, nonrenewable Jobs Plus grants would end in 2019.

The report concludes with recommendations for policymakers, program designers, and other stakeholders for bolstering the economic mobility of public housing residents. Looking forward, HUD has commissioned a second study, which MDRC is leading, to conduct an impact assessment of its Jobs Plus scale-up effort. That study will examine the impact of Jobs Plus on households’ earnings and employment outcomes in the first 24 sites to receive HUD funding to implement Jobs Plus.

Scaling Up a Place-Based Employment Program

Highlights from the Jobs Plus Pilot Program Evaluation