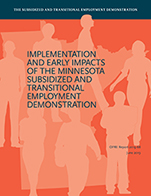 Recipients of Temporary Assistance for Needy Families (TANF) often face barriers such as limited education and work experience, health issues including substance abuse problems, and other obstacles that stand in the way of finding employment. In an effort to help these individuals gain work experience, boost their earnings, and eventually find permanent employment, some states, including Minnesota, have launched programs that use public funds to temporarily subsidize individuals’ wages, known as subsidized employment programs.

Minnesota’s TANF program, called the Minnesota Family Investment Program (MFIP), provides a full range of employment services to families receiving MFIP benefits, including job-readiness workshops and job search assistance. However, in 2014, despite Minnesota’s strong labor market, some MFIP recipients were unable to find employment. The state funded the Minnesota Subsidized and Transitional Employment Demonstration (MSTED) to improve the employment outcomes of MFIP recipients who were unable to find employment after receiving MFIP services for six months or more. MSTED placed participants into two different types of subsidized employment based on their job readiness: Participants who were less job ready were placed in temporary paid work experience in the nonprofit and public sectors, and participants who were more job ready were placed in subsidized jobs in the private sector designed to roll over into unsubsidized permanent positions.

This report presents implementation findings and interim impacts (after one year) from a random assignment evaluation of MSTED in which individuals were randomly assigned to a program group that had access to MSTED services or to a control group that did not have access to MSTED services but could receive other welfare-to-work services. This study is part of a larger demonstration funded by the Administration for Children and Families in the U.S. Department of Health and Human Services, called the Subsidized and Transitional Employment Demonstration (STED), which is testing various subsidized employment strategies in several locations across the country.

The primary goal of the implementation study is to describe how three contracted employment service providers operated MSTED from November 2014 through December 2016 across three Minnesota counties by documenting the intended model, how the providers implemented the model across the three counties, how participants experienced the program, and the extent to which the services received by the program group differed from those received by the control group. The impact study addresses the question of whether MSTED improves outcomes for MFIP recipients in three key areas of interest: employment and earnings, receipt of public assistance, and overall well-being.

The research team evaluated the early impacts of MSTED using a random assignment research design. A total of 799 adults enrolled in the MSTED study between November 2014 and June 2016. Half (403) were randomly assigned to the program group and offered MSTED services, and the other half (396) were randomly assigned to the control group and not offered these services. As a result of the random assignment process, these two groups were comparable on both measured and unmeasured characteristics at the time of study enrollment. The research team followed the program and control group members for 12 months using surveys and government records to measure outcomes in the following three areas: employment and earnings, receipt of public assistance, and overall well-being. If differences emerge between the program groups and the control group over time, and these differences are statistically significant, then the differences can be attributed with some confidence to the subsidized employment approaches.

Findings from In-Depth Interviews with Participants in Subsidized Employment Programs