Improving Academic Outcomes at Westchester Community College During the Pandemic 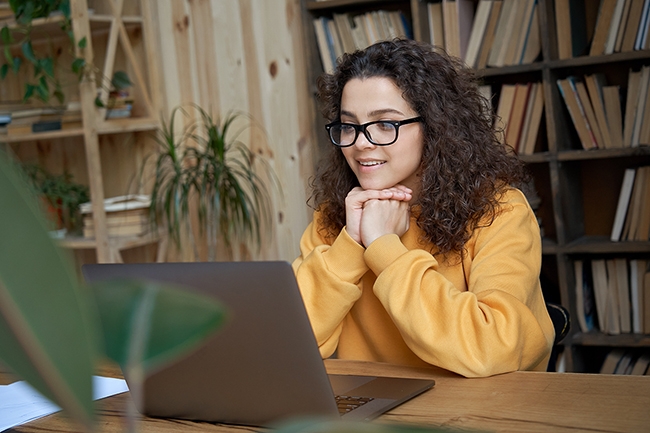 Within our nation’s community colleges, underrepresented students and students from families with low incomes face many academic, personal, and financial barriers that deter them from graduating on time or at all. These barriers were further exacerbated by the COVID-19 pandemic, which introduced new, and more difficult, challenges to prospective graduates.

In 2018, Westchester Community College (WCC) in New York State launched Viking ROADS (Resources for Obtaining Associate Degrees and Success), a student support program that helps students to overcome these obstacles. Despite the pandemic, the program was found to have positive effects on enrollment and credit attainment. This brief describes the early findings from a study of the Viking ROADS program at WCC.

MDRC is conducting a randomized controlled trial of the Viking ROADS program at WCC.[1] Viking ROADS is based closely on The City University of New York’s (CUNY) Accelerated Study in Associate Programs (ASAP), which is a comprehensive community college program that provides academic, personal, and financial support to students from families with low incomes. An earlier randomized controlled trial of ASAP at CUNY and a second evaluation based on ASAP in Ohio both found that the program had significant positive impacts, nearly doubling three-year graduation rates.[2] These effects on college completion are among the largest estimated impacts on graduation rates of any postsecondary program evaluated by MDRC.

Inspired by these results, WCC set out to implement a similar program. With support from Arnold Ventures, CUNY provided WCC with technical assistance to launch Viking ROADS in 2018. Like CUNY ASAP, Viking ROADS entails a comprehensive, integrated, three-year package of supports including:

To receive these benefits, Viking ROADS students are required to enroll full time at WCC, complete required developmental courses within the first year, and use support services monthly.

MDRC’s evaluation of Viking ROADS is intended to determine the effectiveness of the program on student academic outcomes, as compared with the college’s regular programs and services.

To be eligible for the study, students had to be New York residents, first-time or continuing/transfer students with no more than 18 credits and a grade point average of at least a 2.0, enrolled in an eligible major, and willing to enroll full time.[3] Additionally, students could be recommended for no more than two developmental education courses at the time of study intake, with only one need per subject area (or in other words, students could be only one level below college-level courses in up to two subject areas).

The study took place during the COVID-19 pandemic, which had various implications for the study findings, particularly with regard to the study cohorts. Students who began the study in fall 2019 were required to adapt to remote learning after one semester, while the students starting in fall 2020 and spring 2021 joined the study at a time when classes and student supports were available almost exclusively online. In-person classes did not resume until fall 2021 and, even after in-person classes were available, the majority of students continued to opt for a combination of real-time and asynchronous online classes. The pandemic also caused the program to shift support services from in-person to virtual, with meetings occurring over Zoom, by phone, or through email/text messaging. By fall 2021, program services were available across a range of in-person and virtual modalities.

Supplemental Table 1 presents the baseline characteristics of the study sample members, by research group. The majority of the students in the study sample are considered traditionally typical college students: about 78 percent are 19 or younger, about 95 percent have a high school diploma, 88 percent live with their parents, and only about 7 percent have children. Approximately 20 percent of the Viking ROADS study sample is considered nontraditional, which is defined as those students who are over the age of 24, work full time, and/or do not have a high school diploma (having received a GED or other high school equivalency instead). By way of comparison, about half of the Ohio ASAP study sample were nontraditional students. Compared with the CUNY ASAP study sample, students in the Viking ROADS sample are somewhat younger (average age of 20 compared with 22), are less likely to be parents (7 percent compared with 15 percent), and are more likely to be working (53 percent compared with 31 percent).

The Viking ROADS research sample is racially and ethnically diverse: approximately 79 percent of the students identified themselves as students of color. The breakdown is as follows: Hispanic (54 percent), Black (about 18 percent), Asian (about 4 percent), multi-racial (about 3 percent), or “other” (about 1 percent). Just over half of the sample members report regularly speaking a language other than English at home. In addition, about one third of students report that they are the first in their family to attend college.

The current analysis includes enrollment data for the first three semesters and credit accumulation for the first two semesters. During this time, the program group clearly outperformed the control group with respect to persistence in school, full-time enrollment, and credit attainment (see Supplemental Table 2).

SOURCE: MDRC calculations using data from the National Student Clearinghouse and transcript data from Westchester Community College (WCC).
NOTES: Enrollment is based on all available data and includes all enrollment statuses.
Full-time enrollment is defined as enrollment in 12 or more credits and based on data from WCC only.
Estimates are adjusted by enrollment plans prior to learning about Viking ROADS (intent to enroll part time or full time), parental status, marital status, full-time employment, high school diploma receipt, first-generation college student (operationalized as first person in family to attend college), financial independence (operationalized as parents paying less than half of living expenses), and cohort (semester student joined the study).
Statistical significance levels are indicated as: *** = 1 percent; ** = 5 percent; * = 10 percent.
Total sample size is 574 (program group = 288, control group = 286).

Figure 2 presents cumulative credit accumulation over the first two semesters. The program group earned roughly three credits more than the control group over this time. Taken together, these findings suggest that the program enabled more students to persist and take more credits than they would have otherwise. In addition, the program’s impact on credits earned indicates that students were able to manage this increased course load and make more progress toward graduation. 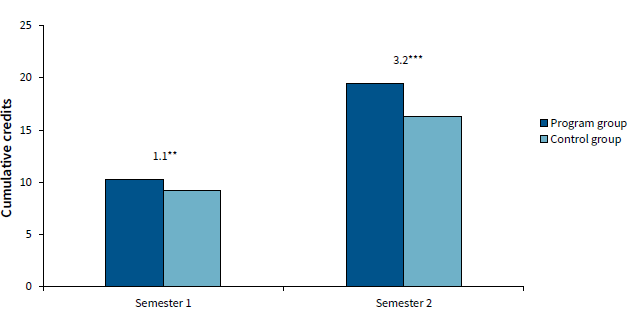 The onset of the COVID-19 pandemic forced institutions and students around the world to adapt to new ways of learning. WCC and the Viking ROADS program were no exception, and to serve students during the pandemic, courses and program services went online.

Over the course of the last few years, Viking ROADS has settled into a hybrid approach for program delivery, offering a mixture of both in-person and online activities. Our interim findings reveal that, through these adaptations, the Viking ROADS comprehensive package of services and supports led to increases in full-time enrollment at WCC in each of the first three semesters, as well as an increase in total credits earned in each of the first two semesters of the period under study. Despite the pandemic, these early effects followed a similar trajectory to what was observed in the CUNY ASAP and Ohio ASAP evaluations, demonstrating the strength of the ASAP model.

A final report with three-year findings will be released in 2024.

[1]A randomized controlled trial is an evaluation method that randomly assigns study participants to either the program group, which receives program services as the intervention, or the control group, which does not.

[3]The Viking ROADS program is open to students in all A.A., A.S., and A.A.S. degree programs except for the following: Nursing, Paramedic, Radiologic Technology, Respiratory Care, and Veterinary Technology.