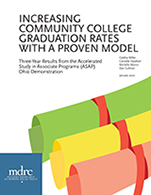 The nation’s community colleges play a central role in producing a more educated workforce and promoting social mobility. They serve about 40 percent of all college students and, not surprisingly, they serve a disproportionate number of low-income and underrepresented students. But most students who enter these colleges do not graduate — only about a third of entering students earn a degree or certificate within six years.

Among the many programs that have attempted to increase graduation rates, one program stands out. Developed by the City University of New York (CUNY), the Accelerated Study in Associate Programs (ASAP) is a comprehensive program that provides students with up to three years of financial and academic support and other support services. Along with those services and other forms of support comes an obligation to attend full time and participate in essential program services. An experimental evaluation of CUNY ASAP found that the program nearly doubled graduation rates after three years.

This report presents findings through three years from a replication of the ASAP model at three community colleges in Ohio. Low-income students were randomly assigned either to a program group, who could participate in their colleges’ new programs based closely on ASAP (called the Ohio Programs), or to a control group, who could receive the usual college services. Comparing the two groups’ outcomes provides an estimate of the Ohio Programs’ effects.

The findings from the evaluation add to a body of evidence showing that comprehensive programs that offer academic, financial, and other forms of student support for multiple years are an effective way to increase college completion rates. The fact that the earlier CUNY ASAP findings have now been replicated in Ohio suggests that ASAP in particular can serve as a national model to help students succeed.