Jobs-Plus — a model proven to help public housing residents find work — is about to be replicated across the country. But to expect similar results as have been achieved in the past, practitioners need to learn from others’ experiences with the program. MDRC has developed a guide to implementing Jobs-Plus, and in 2015 will release a new report on replicating the model.

Public housing developments are among the most economically challenged neighborhoods in the United States. In fact, public housing residents face obstacles to employment even beyond those normally experienced by other low-income people. To address this problem, Jobs-Plus was conceived in the mid-1990s by the U.S. Department of Housing and Urban Development (HUD), the Rockefeller Foundation, and MDRC, and put into practice from 1998 to 2003.[1] It had three parts: (1) employment services at on-site job centers, (2) changes in rent rules that provided financial incentives to work, and (3) community support for work through neighbor-to-neighbor conversations. MDRC tested it at six public housing developments in six cities, which were compared with similar developments in the same cities that did not participate in the program.[2] More than 5,000 people were involved in the study.

The test revealed that in the three developments that were able to adopt the full program, residents did better: They earned an average of $1,141 more per year than residents in the comparison developments, a difference of 14 percent during the program period. Strikingly, residents in developments that received the full treatment kept earning more even after the program ended (an average of $1,517 a year more, or 19 percent), suggesting that Jobs-Plus can help set housing developments on a different long-term financial trajectory. (The combined difference over the two periods was 16 percent.) Among programs that target all work-eligible public housing residents, Jobs-Plus is the only one with rigorous evidence showing sustained positive results. It is also a program that even agencies without Moving to Work status can implement.

Based on this evidence of success Jobs-Plus is already expanding to 10 additional locations in two cities,[3] and HUD has invited proposals from housing authorities in other cities to apply for funds to replicate the model, making Jobs-Plus an important part of federal housing policy. 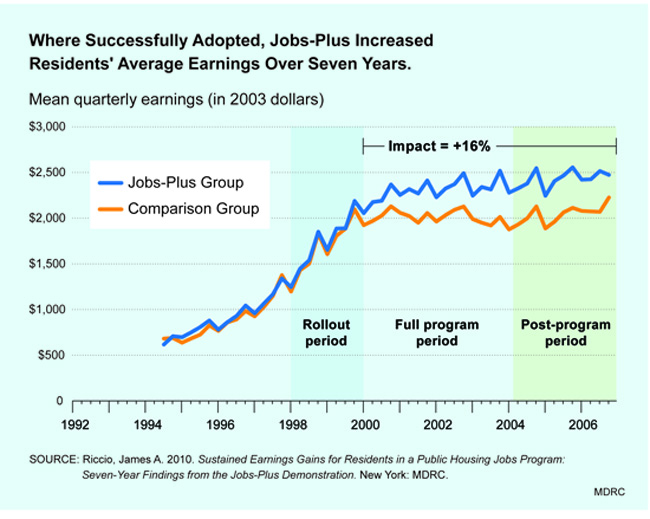 For Jobs-Plus to work, though, all components of the model must be implemented well: on-site employment services, information about employment opportunities, and rent-based work incentives. Rent incentives are particularly important because most public housing authorities must calculate rent at 30 percent of income. This means that as a family’s income rises, so does its rent, acting as a “tax” on new income. In the original Jobs-Plus test, most housing authorities found that the easiest way to provide financial incentives was through flat rents, which allowed residents to increase their earned incomes without worrying that their rents would go up. In that original study two of the housing developments were unable to get those work incentives fully in place, and in those two locations the program had no effect (although not implementing the incentives was not the only factor).

A new MDRC report, due out in 2015, will provide advice to policymakers and practitioners who may be involved in the next generation of Jobs-Plus replication. This advice comes from the experiences of grantees under the Social Innovation Fund. In this most recent replication, a federal benefit known as the Earned Income Disallowance (EID) has functioned as the Jobs-Plus rent incentive, but it has proven difficult to implement: Many fewer people are using it than used the rent incentives of the original Jobs-Plus. MDRC’s new report will offer ideas for how housing authorities might be able to make the EID incentive more effective.

For complete guidance on how to plan, construct, and implement a Jobs-Plus program, read Helping Public Housing Residents Find and Keep Jobs: A Guide for Practitioners Based on the Jobs-Plus Demonstration, also available for free in printed form.

[2]All of these were Moving to Work sites, meaning that they had been given exemptions from rent rules and more flexibility in how they used funds in order to enable them to design and test new strategies.

[3]The first replication, which is ongoing, was launched by the NYC Center for Economic Opportunity (CEO) in 2009 in New York City. Since 2011, the Social Innovation Fund (SIF) of the Corporation for National and Community Service is supporting the CEO-led replication and evaluation of the program in New York and San Antonio. It is also being replicated in seven other locations throughout New York City through the NYC Young Men’s Initiative by the New York City Housing Authority and three city government agencies: the Human Resources Administration, the Office of Financial Empowerment in the Department of Consumer Affairs, and CEO. None of these are currently being supported by HUD on the operations side, although HUD is supporting a cost study of the replication supported by SIF.

Seven-Year Findings from the Jobs-Plus Demonstration

Presented Before the Subcommittee on Federalism and the Census, House Committee on Government Reform