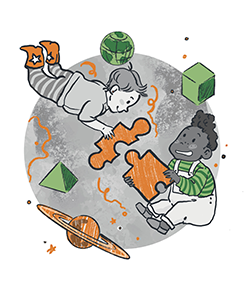 Decades of research on early care and education have shown that four-year-old children who enroll in prekindergarten (pre-K) programs start kindergarten scoring higher on assessments of academic skills than those who do not. A handful of long-term follow-up studies of pre-K have also found that these programs can have lasting beneficial impacts on critical outcomes into adulthood, such as educational attainment, employment, and income.

In the large majority of studies, however, pre-K researchers have only been able to follow students through elementary school. This body of work has generally found that as early as kindergarten or first grade, children who did not attend pre-K perform similarly to children who did when it comes to academic skills such as letter knowledge and counting. This pattern—commonly described as the “fadeout” or “convergence” of pre-K effects—has led to debate about the value of large-scale investment in pre-K. This discussion has gained further traction following recent publication of a study finding that children randomly assigned to the Tennessee Universal Pre-K program performed slightly worse on tests of academic skills in sixth grade than their peers assigned to a wait-list control group. Although there are considerations about the study and program context that are important for interpreting results—such as what services the wait-listed children received in their pre-K year—the findings have raised questions for some about the value of investments in early learning programs.

Yet, when researchers are able to measure a broader range of children’s skills and competencies, there is growing evidence that the benefits of pre-K are more likely to be sustained as children move through elementary school. This brief looks at examples of additional, sometimes less frequently measured types of skills that pre-K programs may help boost in the short term and sustain over the longer term. It then presents evidence from existing studies of pre-K programs conducted by MDRC and other researchers that shows how measuring a broader set of outcomes is key to a more comprehensive understanding of the benefits of pre-K programming. The brief concludes with recommendations for ongoing investment in the creation and collection of measures that go beyond the ABCs and 123s, to better understand the lasting effects of early care and education and to strengthen future programming.