Learning from the Work Rewards Demonstration 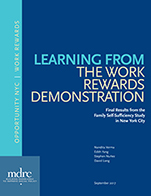 This report summarizes the final findings from the Opportunity NYC‒Work Rewards demonstration. Launched in 2007 by the Mayor’s Office for Economic Opportunity (formerly the New York City Center for Economic Opportunity), this randomized controlled trial tested three strategies for increasing employment and earnings of families receiving Housing Choice Vouchers, which are public subsidies for private market rentals. The report looks at two of those strategies: the Family Self-Sufficiency program (“FSS-only”) ― the main federal effort for increasing employment and earnings and reducing reliance on government subsidies among housing-assisted families ― and an enhanced version of FSS (“FSS+incentives”). FSS offers case management to connect participants to job and training services and helps them build their assets: As housing-assisted families’ earned income increases, so does their share of the rent; under FSS, an amount based on the increased rent portion can be saved in an interest-bearing escrow account maintained by the housing agency and paid to participants when they graduate from the program. Graduation requires that the household head is working and that the family is not receiving welfare in the 12 months leading up to graduation. In FSS+incentives, special cash work incentives were offered to encourage sustained full-time employment. This report presents results for the six years following study enrollment:

MDRC is leading a national evaluation of the FSS program, commissioned by the U.S. Department of Housing and Urban Development, which will place these findings in a national context.

A Guide for Practitioners Based on the Jobs-Plus Demonstration