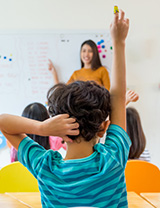 Studies have shown that math skills in early childhood are uniquely and strongly predictive of later outcomes across a range of domains and well into adulthood, including the likelihood of graduating from high school and college completion. The Making Pre-K Count and High 5s studies were designed to rigorously test the short- and long-term effects of improving children’s math experiences in prekindergarten (pre-K) and kindergarten.

The studies used random assignment and tracked children through third grade to test the effects of these math enrichment programs. The confirmatory outcome examined was children’s third-grade math scores.

Taken together, the Making Pre-K Count and High 5s studies present new evidence about the long-term effects of early math interventions on children’s later outcomes. Early math enrichment experiences can lead to lasting gains for children across a variety of outcome domains, even years later. The findings suggest that high-quality early math instructional practices could make a difference, particularly for children with the greatest need.

Understanding Where All Kids Are