Costs, Benefits, and Impacts from the WorkAdvance Demonstration 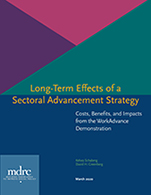 This report summarizes the long-term findings of a rigorous random assignment evaluation of the WorkAdvance model, a sectoral training and advancement initiative. Launched in 2011, WorkAdvance goes beyond the previous generation of employment programs by introducing demand-driven skills training and a focus on jobs that have identifiable career pathways. The model is heavily influenced by the positive findings from the Sectoral Employment Impact Study completed in 2010, as well as prior research on job retention and career advancement strategies.

The WorkAdvance model was implemented between June 2011 and June 2013 by four providers — Per Scholas, St. Nicks Alliance, Madison Strategies Group, and Towards Employment — and a total of 2,564 individuals enrolled in the study. Several previous reports described the implementation, participation, cost, and interim impact findings of WorkAdvance and showed encouraging evidence for the WorkAdvance model. The impact findings presented in those reports covered the first three years of follow-up. While those findings showed earnings gains for some programs in some years, whether WorkAdvance could consistently increase earnings in the long term was still an open question.

This report presents the long-term economic impacts of WorkAdvance and covers a two-year period occurring between four and eight years after individuals entered the study. The economic outcomes are based on National Directory of New Hires data and include 2017 and 2018. The report also builds on a previous cost analysis and presents findings from a full benefit-cost analysis to examine whether the effects of WorkAdvance resulted in gains or losses from the perspective of WorkAdvance participants, the government, and society.

Overall, the WorkAdvance results support the case for focusing on how sector programs can be improved. The long-term economic impacts show that sector programs can increase earnings in the longer term and can lead to advancement gains over time for low-income individuals, but not all sector programs will lead to increases in employment and earnings. Focusing future efforts on how to make the sectoral approach — in particular, the advancement-focused services — more consistently successful can help workforce providers strengthen sector-based programs. This is the final planned report for the WorkAdvance evaluation.

Filling All the Seats in the Room

Three-Year Impacts from the WorkAdvance Demonstration