Interim Findings from the Paycheck Plus Demonstration in Atlanta 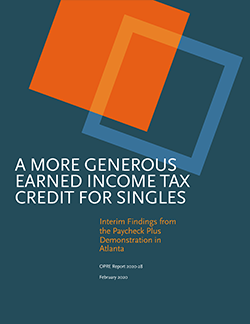 Employment and wages have been rising over the last several years of the recovery from the Great Recession that ended in 2009. But the recent wage increases are not enough to offset decades of stagnating or even falling wages for many groups of low-wage U.S. workers. A central policy question is how to ensure that economic growth is shared more widely and that people who work are not poor. The Earned Income Tax Credit (EITC) is one option. By providing a refundable credit at tax time, it increases incomes and reduces poverty for millions of families. But as currently designed it does little for workers without dependent children, providing a very small credit targeted to those with the lowest earnings.

Paycheck Plus is a test of a policy that offers a more generous credit to low-income workers without dependent children. The program offers these workers a credit, referred to in the program as a bonus, of up to $2,000 at tax time and is being evaluated using a randomized controlled trial in New York City and Atlanta. Earlier findings from New York City indicate that the program increased after-bonus incomes and led to a small increase in employment rates.

This report presents interim findings from the test in Atlanta. To run the project, MDRC partnered with United Way of Greater Atlanta, which had recently assumed leadership of a large coalition of Volunteer Income Tax Assistance (VITA) programs. Between late 2015 and early 2016, over 4,000 low-income single adults were recruited to take part in the study. Half of them were selected at random to be eligible for the Paycheck Plus bonus for three years, starting with the 2017 tax season.

Paycheck Plus was tested in Atlanta to add to the evidence of how an expanded credit might work in a context different from that of New York City. The study will assess take-up rates of the bonus and its effects on employment, earnings, and income. The goal is to use the findings from both cities to inform consideration — whether federal or state and local — of tax credit amounts for workers without dependent children.

Between October 2015 and April 2016, the project recruited just over 4,000 single adults without dependent children to take part in the study. Individuals were eligible for study enrollment if they were not married, had a valid Social Security number, were not planning to claim a dependent child on their taxes in the subsequent year, were between the ages of 21 and 64, earned less than $30,000 in the prior year, and were not receiving or applying for Supplemental Security Income (SSI) or Social Security Disability Insurance (SSDI). Once eligible individuals agreed to participate, half of them were assigned at random to a group eligible for Paycheck Plus and half were assigned to a group not eligible for the program but still eligible for existing tax credits. Individuals assigned to the Paycheck Plus group were given a brief explanation of the bonus on a take-home sheet. The effects of the Paycheck Plus offer were estimated by comparing the full program group, including those who did not receive bonuses, with the full control group.