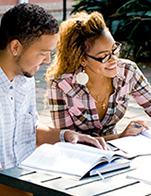 Postsecondary education is widely seen as a necessity in the modern economy. Yet students at community colleges often face steep odds when it comes to completing a degree. Community colleges serve many low-income and first-generation students as well as students of color, all of whom must contend with many obstacles to success. These include the inability to pay for expenses not covered by financial aid, a lack of academic preparedness, a confusing array of requirements and paperwork for financial aid and course selection, and competing priorities such as the need to work. At the same time, two-year colleges are severely underfunded, and therefore are unable to provide the level of personal support that many students require. The three-year graduation rate for first-time, full-time freshmen in community colleges is only 35 percent.

MDRC and the Detroit Regional Chamber partnered in 2016 to create the Detroit Promise Path (DPP), an evidence-based student services program designed to help more Detroit high school graduates—among the nation’s most underserved students—enroll and persist in college, accumulate credits, graduate, and potentially transfer to a four-year program. DPP builds on an existing scholarship program called the Detroit Promise, launched in 2013, which covers community college tuition and fees for up to three years of attendance. At the heart of DPP are campus coaches who help students acclimate to college, proactively reach out to them with help and reminders about tasks and deadlines, and offer a sympathetic ear to young people who may be grappling with personal challenges—all with the goal of keeping them in school and on track to graduate. This report presents findings from MDRC’s randomized controlled trial evaluation of DPP at five Detroit community colleges.

The campus coach and other DPP program components were well-implemented at four out of five of the colleges, and program participation was high. More than 90 percent of program group students responded to coaches’ initial outreach, and participation in coaching meetings remained high throughout the follow-up period for students enrolled in college. A student survey found that nearly 90 percent of respondents rated the program as valuable or highly valuable.

Many students continued to face significant obstacles to enrollment and persistence, however. Only about 65 percent of students in the program group enrolled in courses in the fall semester that they applied for a Promise scholarship. Of these enrolled students, more than 40 percent dropped out of school after one year. Students most often identified nonacademic barriers such as financial issues as the reason they dropped out of school.

The evaluation found that more students in the DPP program stayed enrolled in school and earned more credits, compared with students who were offered the Promise scholarship alone. However, at the three-year mark, there was no evidence of an impact on degrees earned.

It is clear that promoting college access is not enough. Programs must also tackle progress—helping students stay in school and get to graduation. The Detroit Promise scholarship combined with the Detroit Promise Path program supports is a step toward helping students stay in school. But there is still more to be done to help them get to graduation, too.