Today two major influences are combining to produce particularly acute difficulties for low-income and disadvantaged Americans: long-term trends underway since at least the early 1980s and the intermediate-term shock of the Great Recession that began in 2008.

The long-term trends mostly have to do with falling wages, widening inequality and the decrease in economic mobility available to people from poor backgrounds. David Autor cited data showing that across many different countries, not just in the United States, since the 1990s low-paying and high-paying jobs have expanded while middle-paying jobs have declined. 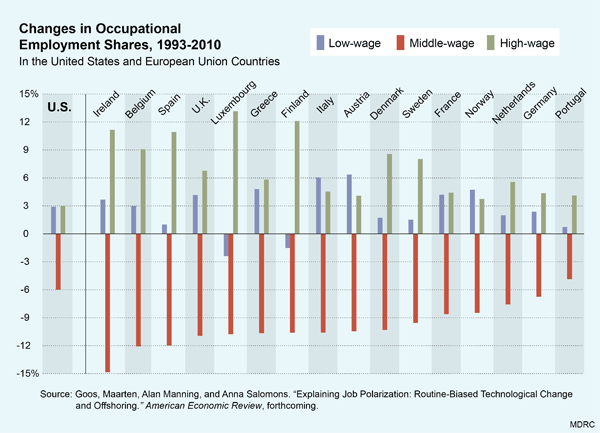 Lawrence Katz pointed out that much of disparity can be attributed to a growing education gap: people with college degrees did better and better in the 1980s and 1990s, while those with only a high school education did worse. (Since 2000, those with college degrees have done badly, he said, while those with only a high school education have done very, very badly.) The education gap accounts for about two-thirds of the growth of inequality in the United States since 1980; the share of income taken by the top 1 percent of earners is about equivalent to the remaining third.

David Autor pointed to Career Academies as a model that could help get young people into jobs with better career prospects. Work by Public/Private Ventures and others has also shown that sector-based approaches — like the one MDRC is now testing with WorkAdvance — could be fruitful. He further suggested that expanding the Earned Income Tax Credit (EITC) to adults without dependents, a concept MDRC is testing with Paycheck Plus, could help make low-income work more rewarding.

The widening inequality in earnings is also translating into inequality in family structures. David Autor noted that there have been sharp declines in marriage rates among less-educated workers, and a corresponding rise in single-parent families. This is problematic for two reasons: because single-headed households are more likely to have low incomes and to live in distressed communities with poorly performing schools, and because a single parent struggling to maintain work will also have to struggle to make time for a child. Single-headed and poorer households are able to spend less time and money investing in their children’s skills, which manifests itself in a disparity in academic achievement. 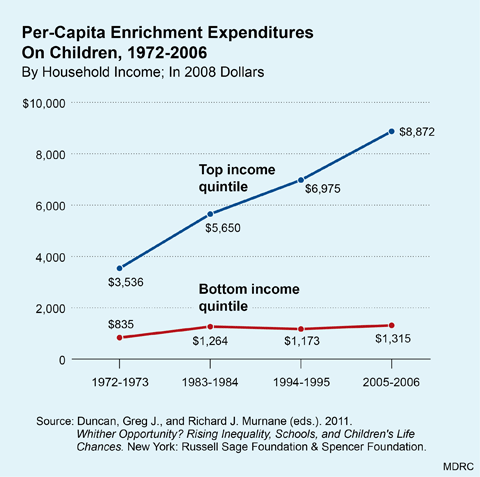 MDRC has played a role in government-sponsored research and demonstration efforts to support family structures — notably through its Supporting Healthy Marriage and Building Strong Families projects — although the results have not been very positive. More promising has been MDRC research showing that programs that increase employment, earnings, and income by helping to make low-wage jobs pay can have notable benefits for children’s cognitive and emotional development. 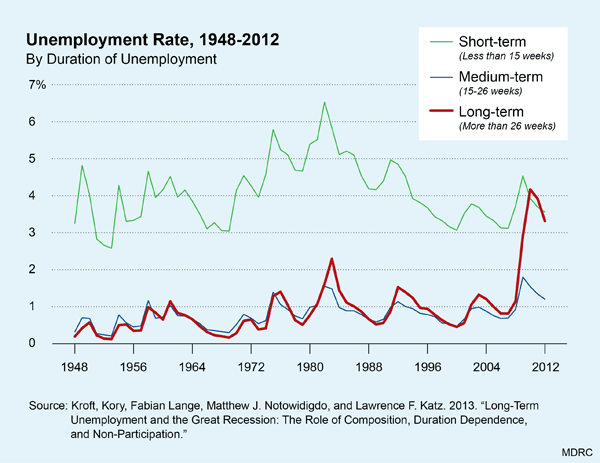 Katz also cited studies showing that the longer one is unemployed, the more difficult it is to get a new job. His own work has found that unemployment spells exceeding six to nine months mark a tipping point, after which it is very difficult to regain employment. And regardless of the eventual outcome, workers displaced from stable jobs have 15 to 20 percent lower earnings even 15 to 20 years later, and experience a 50 to 100 percent increase in mortality the year after displacement and 10 to 15 percent higher mortality as much as 20 years after displacement. The effects are even intergenerational: children whose parents lose jobs perform worse academically, are less likely to go to college, and have lower earnings as adults themselves. Surprisingly, the deleterious effects of the Great Recession appear to have affected people across education, income, occupation, gender, and racial lines.

David Card noted that active labor-market policies — job-search programs, job-training programs, and subsidized employment — have been proposed in various countries to address all three of these current major problems: (1) the high rate of unemployment (particularly for the long-term unemployed), (2) the low employment rates and earnings of displaced workers even years after a displacement event, and (3) the long-term problem that has always been the focus of MDRC, the underclass of disadvantaged people with little or no connection to the labor market.

Unfortunately, the amount of investment available for these policies has been small compared with the scale of the problem. The federal government’s investment in them in the last few years has been $7 or $8 billion, which Card called “a trivial amount.” It is all the more important, then, to make the best possible use of the funds that are available, in order to help struggling families and reconnect disadvantaged workers with work and career opportunities.

Card described the results of a meta-analysis he and his colleagues conducted of more than 75 studies of active labor-market policies. They found that job-search, “work-first” programs most consistently show positive short-term effects, but that in the long run classroom or on-the-job training programs may do better. He also noted that some job-search programs may have positive effects on the people who participate in them, but especially in a recession they may do so by displacing other job seekers. Finally, he added that passive reforms — financial incentives — can also work well. Often active policies are used as a substitute for passive reforms, but the evidence on passive reforms may be better, and it is always possible to implement them.

Lawrence Katz pointed to positive results from sectoral employment programs like WorkAdvance that include employer involvement; training and life skills components; job development and placement; and retention and follow-up services. He also mentioned the positive results of Career Academies and Jobs-Plus.

Several strategies are worth investigating moving forward: subsidized employment, housing subsidies tied to work programs as in Jobs-Plus, and especially conditional cash transfers of the type MDRC is testing in the Opportunity NYC Demonstrations. Conditional cash transfers are appealing because they are not merely cash giveaways but investments in children and the future.

In sum, as David Card and others noted, the United States today is in a very difficult economic situation. The problems MDRC has studied are if anything more dire today than they were several decades ago; clearly much remains to be done. MDRC can continue to play an important role in making sure education, training, employment services, and income assistance operate more effectively for the poor and disadvantaged.