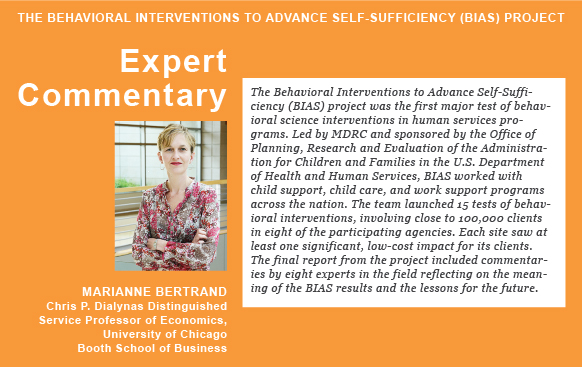 In this eighth and final installment of the Expert Commentary series from the BIAS project, Marianne Bertrand talks about the potential for a “broader behavioral agenda” that would include larger contributions from psychology and could transform public policy in ways that might induce long-term changes in behavior (discussed in Chapter 6 of the final report).

The BIAS project offers overwhelming evidence that insights from the behavioral sciences can be successfully leveraged to improve access to human services among the poorest and most vulnerable families in the United States. While the levels of the effects of the nudge-type interventions studied in the project are quantitatively modest overall, because they correspond to “nano-sized” investments, the returns are impressive. The private sector has been a long-time, avid user of behavioral “tricks” such as those embedded in the BIAS project, but it is refreshing to finally see those same insights leveraged systematically by the social sector to improve the implementation of public policy.

The 15 tests performed under BIAS only scratch the surface of the positive transformation that could be achieved by a redesign of human services programs that would be more closely aligned with the findings of the behavioral sciences. Insights from social psychology, for instance, have been slower in making their way into the behavioral economics agenda, which has been historically more grounded in the “heuristics and biases” subfield of cognitive psychology. For example, decades of experimental work in a laboratory setting have demonstrated the power of social norms, social influences, and social identity in driving the choices that we make. While likely going beyond the small-size investments described in the BIAS final report,[1] interventions that are aimed at social identity change or the internalization of new norms deserve to play a more central role in the application of behavioral sciences to public policy. Moving into even larger-size investments, recent work has shown how interventions that are grounded in cognitive behavioral therapy and clinical psychology can benefit individuals in need and hence should also be considered as potential add-ons to standard public policy.[2] Finally, psychologists have taught us a lot about how to motivate people, and why the standard incentive schemes described in a microeconomics textbook may fail or even backfire; this knowledge could be further embedded in the design of social programs.

Put in other words, the focus on small changes that has been made popular by Sunstein and Thaler’s book Nudge may counterproductively restrain how we are currently conceiving of importing behavioral sciences insights into the formulation of public policy. Such an extension of the behavioral “toolbox” seems particularly important to me as we aspire to induce longer-term changes in behavior. Traditional nudges such as the ones studied in the BIAS final report seem most effective when it comes to immediate, short-term behavioral changes, such as getting a recipient of Temporary Assistance for Needy Families (TANF) to attend a required meeting with a case worker. But transforming the life of TANF participants would require a more sustained behavioral change, which would likely need to come from a change in those participants’ current- and future-self perceptions, and their beliefs and preferences.

Another reason why the work outlined in the BIAS final report is a lower bound of what could be achieved with a more behaviorally founded public policy is that the focus is primarily on program participants, or program-eligible individuals. Yet, for most of the social policies under consideration, a successful implementation may be as much a function of the behavior of the staff members who are in charge of implementation as it as of the behavior of the participants. Indeed, these social workers are also subject to cognitive biases and limitations, have beliefs that may hinder their productivity, hold stereotypes (even if implicit) that may negatively spill over into the interactions they have with the families who rely on them, and so on. Nothing should stop policymakers and practitioners from applying the nudge agenda, or the broader behavioral agenda I outline above, to the program providers themselves.

Finally, economists remain too central to the design of behaviorally inspired public policy, and this need may limit the creativity, and ultimately the efficacy, of this general line of work. In many regards, behavioral economics is an unfortunate name for a research agenda whose main point is to demonstrate that psychology, and not just economics, should be central to the way we think about designing programs and interventions for maximum impact. More progress can be achieved only with stronger collaboration between economists and psychologists. This means that economists must be willing to cede some ground in their role as advisers to policymakers; it also means that a larger and more diverse group of psychologists must be willing to start considering the field as legitimate as the laboratory for testing interventions.

[2]See, for example, Sara B. Heller, Anuj K. Shah, Jonathan Guryan, Jens Ludwig, Sendhil Mullainathan, and Harold A. Pollack, “Thinking, Fast and Slow? Some Field Experiments to Reduce Crime and Dropout in Chicago,” The Quarterly Journal of Economics 132, no. 1 (February 2017): 1-54.