NYC as a Laboratory for Learning About Career and Technical Education 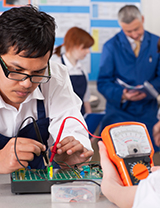 During the last decade, career and technical education (CTE) has retaken a prominent place in federal, state, and local education policies. The New York City Department of Education (NYCDOE) oversees one of the largest and most diverse CTE systems in the country. In collaboration with researchers from MDRC, Boston College, and the University of Connecticut, the Research Alliance for New York City Schools has undertaken a multiyear study of CTE that is informing policy decisions in New York City and nationally. Findings from the study are particularly relevant to the work of the NYCDOE’s Office of Student Pathways, which is overseeing a large expansion of “career-connected learning opportunities” across New York City’s high schools.

This report is one of several that will emerge from the ongoing study. It focuses on 37 CTE-dedicated high schools, which are structured to ensure that all enrolled students participate in a CTE Program of Study from 9th through 12th grade. These programs are organized around an industry-aligned theme (for instance, construction, IT, and health services) and offer a sequence of career-focused courses, work-based learning opportunities, and access to aligned college-level coursework. This study uses an especially rigorous approach to compare the experiences and outcomes of nearly 19,000 NYC students who were assigned to a CTE-dedicated high school between 2013 and 2016 with those of similar students who also applied to CTE programs but were assigned to another high school during the same period. Among the key findings:

The study team is working to obtain data on students’ employment and earnings, as well as on longer-term college enrollment, persistence, and completion outcomes. This information will be crucial to fully understand the impacts of NYC’s diverse CTE options. Upcoming reports from this study will assess the costs associated with CTE and the implementation and impact of CTE programs in comprehensive (that is, non-CTE-dedicated) high schools.