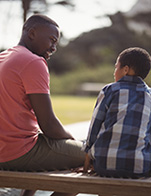 The Procedural Justice-Informed Alternatives to Contempt (PJAC) demonstration project integrated principles of procedural justice into enforcement practices in six child support agencies across the United States. Procedural justice is fairness in processes that resolve disputes and result in decisions. Research has shown that if people perceive a process to be fair, they will be more likely to comply with the outcome of that process, whether or not the outcome was favorable to them.

Child support agencies aim to secure payments from noncustodial parents to support the well-being of their children. The target population for the PJAC demonstration project was noncustodial parents who were at the point of being referred to the legal system for civil contempt of court because they had not met their child support obligations, yet had been determined to have the ability to pay. Eligible parents had at least several months of nonpayment or severe underpayment when they were enrolled in PJAC, often owed a significant amount of child support debt, and had long histories with the child support program. The target population represents a group of parents who are especially difficult to obtain payment from.

The PJAC demonstration project aimed to address parents’ reasons for nonpayment, improve the consistency of their payments, and promote their positive engagement with the child support program and custodial parents. Between 2018 and 2020, over 11,000 noncustodial parents who met these criteria across the six study sites were randomly assigned either to a program group offered PJAC services or to a group who instead moved into the business-as-usual contempt process. This brief draws from several data sources, including interviews with parents, child support staff members, and staff members from the Office of Child Support Enforcement; a PJAC-specific management information system; administrative databases; courtroom observations; and a staff survey.

Part of a series of publications from the PJAC demonstration, this report presents the first systematic analysis of the implementation of the PJAC model. The data show that principles of procedural justice can be integrated into existing child support processes. Staff members implementing the PJAC model described various strategies to incorporate procedural justice principles into their interactions with parents and overwhelmingly felt that the PJAC model was beneficial to parents. Staff members integrated principles of procedural justice into their interactions with parents and also put them into action through informational materials, enhanced child support services, and referrals to outside support services. Child support agencies also experienced challenges in implementing the PJAC model, for example in locating noncustodial parents and engaging them in services. Staff members could not reach 33 percent of the noncustodial parents randomly assigned to PJAC services within 12 months of enrollment. This finding accords with program designers’ understanding that noncustodial parents who are at the point of being referred to the legal system for civil contempt of court are a particularly hard group to engage in services.