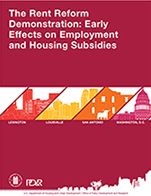 The way in which the government subsidizes rent for low-income families may affect more than tenants’ housing; it might also affect their efforts to work. This report, the second in a series, examines the short-term effects of a new rent subsidy policy on tenants’ work, earnings, and housing-related outcomes.

The federal government’s tenant-based Housing Choice Voucher program, administered by the U.S. Department of Housing and Urban Development (HUD), helps low-income families rent housing units from private landlords. This crucial strand of the safety net requires families to contribute to their rent and utilities according to their ability to pay: the lower their income, the lower their contribution, and the higher the government’s subsidy. Some critics contend that while this policy offers critical protection to families with low or falling incomes, it may also discourage some tenants’ efforts to work and increase their earnings. The system is also burdensome to administer, because families’ incomes are reviewed at least annually, subsidy levels are readjusted frequently, and complex rules need to be followed to determine subsidy amounts.

To learn whether an alternative rent policy could simultaneously, and without increasing costs, better support tenants’ work efforts, reduce administrative burdens on housing agencies, and avoid increases in families’ material hardships, HUD is sponsoring the Rent Reform Demonstration for working-age, nondisabled recipients of tenant-based Housing Choice Vouchers. The new policy includes a change in rent calculation rules, minimum rents that all families are expected to pay, an extension of regular income reviews to once every three years (allowing families to increase their earnings with no increase in their rent contribution during that time), a number of safeguards to protect families from excessive rent burdens, and other features.

HUD selected MDRC to help it and four collaborating public housing agencies (in Lexington, Kentucky; Louisville, Kentucky; San Antonio, Texas; and Washington, D.C.) design the new approach and rigorously evaluate it. The study uses a randomized controlled trial to compare the experiences of voucher holders assigned to the new rent policy with those who continue to be subject to the existing rent policy. The new policy took effect for participating families in 2015.

Within the first 18 months after it took effect, this policy led to modest increases in tenants’ earnings in two of the four housing agencies (Lexington and San Antonio). Across all four agencies during the first 12 months of follow-up, the new policy also reduced certain types of housing agency transactions with families, particularly more time-consuming transactions related to fluctuations in families’ incomes. The policy also modestly reduced families’ expenditures for rent and utilities and their likelihood of exiting the voucher program. Because their rent and utilities costs were capped and families were somewhat less likely to exit the voucher program, those in the new rent rules group received more in housing subsidies during this early follow-up period than they would have received under existing rules, as intended by the new policy’s goal of rewarding work.

The Rent Reform Demonstration: Interim Findings on Implementation, Work, and Other Outcomes