The Rent Reform Demonstration: Interim Findings on Implementation, Work, and Other Outcomes 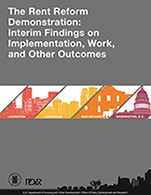 For many years, federal Housing Choice Voucher (HCV) subsidies, which help eligible low-income families cover their rental costs in the private rental market, have been calculated in a manner that may create a disincentive for tenants to work. Because voucher holders pay 30 percent of their income (after certain exclusions and deductions) toward their rent and utilities, their subsidies fall as their incomes rise, creating an implicit marginal “tax” on increased earnings. Critics of this rent policy believe that it also imposes a substantial and costly administrative burden on public housing agencies (PHAs).

The U.S. Department of Housing and Urban Development (HUD) launched the Rent Reform Demonstration to test important modifications to the federal government’s traditional rent policy to determine whether the changes can improve tenants’ success in the labor market and reduce the administrative burden on PHAs. The demonstration focuses on families living in privately owned housing units and receiving “tenant-based” vouchers, which are not restricted to any rental building or apartment.

The new policy changes the ways in which subsidies are calculated; introduces or increases the minimum dollar amount families are expected to pay toward their rent and utilities; requires no income reporting to the PHA and no reductions in families’ housing subsidies for 3 years, even if their incomes grow; and includes a number of safeguards to protect tenants from excessive rent burden, such as when their incomes decline. The demonstration began enrolling voucher holders in 2015 and is operating in four cities and PHAs: Lexington-Fayette Urban County Housing Authority in Lexington, Kentucky; Louisville Metropolitan Housing Authority in Louisville, Kentucky; San Antonio Housing Authority in San Antonio, Texas; and District of Columbia Housing Authority in Washington, DC. HUD selected MDRC and its partners — the Urban Institute, the Bronner Group, Quadel Consulting & Training, Ingrid Gould Ellen (New York University), and John Goering (City University of New York) — to lead the initiative, working closely with them and the four PHAs to help design a new rent policy and to evaluate it using a randomized controlled trial.

This interim report, the third in a series of five reports on the Rent Reform Demonstration, presents results from the first 27 to 30 months of follow-up. It covers the new rent policy’s effects, or “impacts,” on families’ labor market and housing-related outcomes, receipt of other government benefits,  and use of homelessness services. It also uses in-depth qualitative interviews conducted with PHA staff and tenants to explore their experiences with, and views of, the new policy.

When the findings for all four PHAs are combined, the new policy did not generate statistically significant increases in tenants’ average earnings during the available follow-up period. The story varied substantially across locations, however, with some positive effects on earnings in Lexington and San Antonio but not in Louisville and Washington, DC. The new policy increased families’ tenure in the voucher program and the total amount of housing subsidies received; the policy also reduced the number of certain types of PHA transactions with families. As of now, it has had little effect on families’ receipt of other government benefits. A preliminary analysis of administrative costs suggests that the new policy is unlikely to have cost more for PHAs to operate than the existing policy (not counting subsidy expenditures) during the available followup period and may have cost somewhat less.