Scaling Up a Place-Based Employment Program

Highlights from the Jobs Plus Pilot Program Evaluation 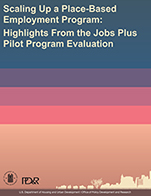 Public housing developments are among the most economically challenged communities in the United States. In fact, many public housing residents face substantial personal and other challenges, which could be barriers to employment and advancement. To help address this problem, the U.S. Department of Housing and Urban Development (HUD), the Rockefeller Foundation, and MDRC conceived Jobs Plus in the mid-1990s.1 The model encourages economic mobility by providing employment services, offering rent-based work incentives — so that earnings increases are not counted when determining rent — and building community support for work (CSW).

First put into practice in six cities from 1998 to 2003, Jobs Plus was replicated through the Social Innovation Fund (SIF) of the Corporation for National and Community Service in 2011 in the Bronx, New York, and in San Antonio, Texas. The City of New York expanded Jobs Plus to seven additional locations in 2013. In 2015, it became part of federal housing policy when HUD launched another variation of the model to increase employment and earnings among public housing residents. Each replication effort made slight changes to the original model in an effort to incorporate lessons learned and adapt to new contexts and circumstances.

In 2015, HUD awarded $24 million to nine public housing authorities (PHAs) — or the first cohort of grantees — that were selected to operate the model as part of HUD’s Jobs Plus Pilot Program, a scale-up and replication effort of the original Jobs Plus model. This report summarizes the startup experiences of those first nine sites. The early experiences of this cohort of HUD grantees are important, because they can be instructive to current and future housing authorities that operate this program. The original demonstration, which was the subject of a rigorous evaluation, found that program operators faced many daunting implementation challenges, and only the Jobs Plus developments that fully implemented all the components of the model saw the program boost annual earnings (Riccio, 2010).

To begin documenting HUD’s expansion — or scale-up — of Jobs Plus, this first report looks at the early startup phase, from April 2015 to October 2016, for the first cohort of nine sites and when their programs were in operation for roughly one year. The report examines their experiences launching Jobs Plus and the progress made getting staff in place, building partnerships, delivering services, and structuring the program on the ground during this initial roll-out period. These early insights and observations may help inform the sites, HUD, and other stakeholders on practices that may be worth emulating and obstacles that may be encountered as HUD continues to build and strengthen the intervention. The report also examines key challenges and accomplishments and provides a starting point for a final implementation report on the sites included in this evaluation.

1 The original model was named “Jobs-Plus” (with a hyphen), but the current program being replicated by HUD is referred to as Jobs Plus (without the hyphen). This report uses the current treatment, Jobs Plus, for all iterations of the program.

The Second Generation of Jobs-Plus Programs

Implementation Lessons from San Antonio and the Bronx