The Time to Incorporate Behavioral Insights Is Now 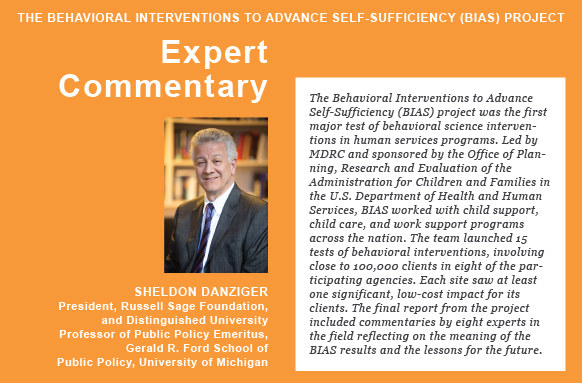 In this Expert Commentary, the first in the series, Sheldon Danziger talks about the value of incorporating insights from behavioral science into new system-level interventions when developing policies to help low-income populations (discussed in Chapter 1 of the final report).

It has taken much too long for poverty researchers and program analysts to incorporate the insights of behavioral economists into their research and policy designs. Thus, I applaud the collaboration between ACF’s Office of Planning, Research and Evaluation and MDRC, which represents the first time that a federal agency has sought to implement behavioral insights into safety net programs.[1]

At least for the last three decades, program rules and procedures have been designed to target benefits to the “truly needy” among the eligible population. As a result, government agencies have “opt-in” rather than “opt-out” rules, detailed reporting requirements, and frequent benefit recertification procedures that discourage some eligible families from receiving benefits. This strategy neglects the research demonstrating that the experience of poverty affects decision making negatively and likely prevents the poor from claiming all the benefits to which they are entitled.[2]

The current system is much more focused on reducing the number of “false positive” cases wherein ineligible individuals receive benefits than it is on reducing the number of “false negative” cases wherein those who are eligible fail to receive benefits because, for example, they miss appointments, do not complete paperwork, or cannot meet other administrative requirements. Given current program rules and agency procedures, the BIAS results document that the well-being of the poor could be modestly improved if the kinds of interventions conducted here were implemented on a much broader scale.

However, if we are determined to make greater progress against poverty using the new behavioral insights regarding the effects of scarcity and material hardships on the decision-making behavior of the poor, we would have to make major changes in safety net program rules and agency practices. Policymakers who seek to reduce the cognitive and administrative burdens now placed on the poor in order to maximize their benefits receipt would have to reject the long-standing assumption that the poor are rational economic actors and embrace behavioral science instead.

The final report on the BIAS project suggests that such a reorientation is possible.[3] Specifically, the concluding chapter sets out “a framework for moving beyond nudges” that would shift from the BIAS interventions that were designed to get poor individuals to respond more effectively to the current rules toward the design of new system-level interventions that would implement rules that incorporate behavioral insights.

One can imagine, for example, shifting the current reporting burden on recipients of child care subsidies or Supplemental Nutrition Assistance Program benefits (food stamps) to the agencies themselves. Recipients must now report fluctuations in earnings to the agency, which typically requires them to set up an appointment, to miss some work hours, and to bring pay stubs to the agency during hours that it is open. Given modern computer technology, however, an alternative design that incorporates behavioral insights and a concern for false negatives would simply require that agency personnel download the recipients’ earnings records from the state employment agency. When fluctuations occur, benefits would be automatically adjusted and the recipient would be notified of the change. In this case, no one is terminated from the rolls for missing an appointment because a child is sick or the bus was late or because a recertification notice went lost in the mail.

As the BIAS final report demonstrates, we know enough to launch high-intensity interventions that could change the choice architecture of safety net programs to better reflect what we have learned about the decision making of the poor. What we don’t know is whether we can muster the political will to make these changes, particularly because behavioral research suggests that the changes are likely to increase program participation and thus increase program costs in an effort to further reduce poverty.

[1]  A personal reflection — I would prefer a project acronym other than “BIAS” for this work.

[2]  Lisa A. Gennetian and Eldar Shafir, “The Persistence of Poverty in the Context of Financial Instability: A Behavioral Perspective,” Journal of Public Policy Analysis and Management 34, 4 (2015): 904-936; Sendhil Mullainathan and Eldar Shafir, Scarcity: Why Having Too Little Means So Much (New York: Times Books, 2013).