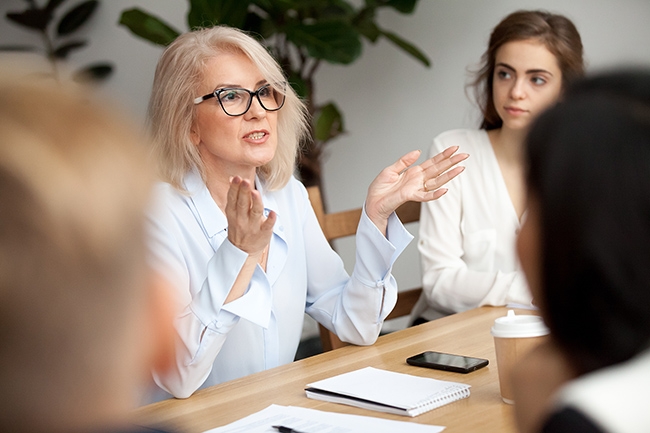 One tool state policymakers can use to assess the distribution of state funding is a state finance equity audit. Equity audits are systematic analyses of how policies, procedures, and practices reify systemic racism (that is, produce inequitable outcomes along racial lines). State finance equity audits (which can also include analyses of inequities along class lines) are new to higher education and have not yet been conducted in any states, but there is growing interest in using them to identify inequities in state funding. For example, a state finance equity audit was included in a recent federal bill (H.R. 5376) as a precondition for a college-completion grant program.

This brief outlines the evidence that links state funding to student outcomes and highlights inequities in the distribution of state funding to public institutions. It proposes that states review their existing higher education funding structures using finance equity audits so that policymakers can better understand the equity implications of their states’ funding models. After a state finance equity audit, policymakers could use the findings to propose adjustments that distribute state resources to institutions more equitably. They could also direct new funding to specifically address the systemic underfunding of institutions where students underrepresented in higher education are more likely to attend.

Institutional revenues come from multiple sources, such as student tuition and fees (including financial aid), state and local appropriations, federal funding, and private donations, and institutions vary in their reliance on each source. However, as state and local appropriations have declined, public institutions have become increasingly reliant on tuition revenue. Some institutions, particularly selective research universities, have a much greater ability to generate tuition revenue, federal research funding, and private donations.[3] However, community colleges and public regional institutions are more reliant on state and local support, and cannot replace the lost revenue with revenue from other sources.[4]

State funding is strongly linked to public institutional revenues (the total financial resources available with which to educate students) and student outcomes: Institutions that have more revenue to spend on their students have higher retention rates and graduation rates, and their students have stronger outcomes after college. The amount of funding a state provides to public institutions is directly tied to student enrollment, graduation rates, and statewide degree attainment, in part because state funding declines lead to reductions in direct educational spending including spending for instruction, academic support, and student services. State funding cuts are particularly detrimental at community colleges and other institutions that are more reliant on state funding and cannot replace the lost revenue with revenue from other sources; these institutions must make the greatest cuts to expenditures following state funding declines.[5]

The disparate impacts of state funding cuts on broad-access institutions is concerning.[6] These institutions enroll a disproportionately large and increasing share of students of color and students from low-income backgrounds compared with selective, four-year universities. Limited state support, and an inability to raise alternative revenues, leaves these broad-access institutions with fewer resources to spend per student. In contrast, doctoral universities typically have the most revenues, and disproportionately educate the most advantaged (full-time, White, affluent) students (see Figure 1).[7] 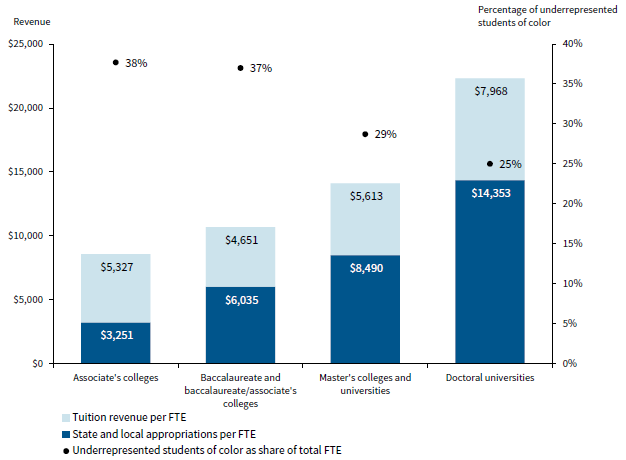 To correct these disparities and equalize per-student state higher education spending on White students and Black and Latino students, it is estimated that in total across the nation, states would have to spend approximately $5 billion more per year. These trends will probably continue if they are not interrupted—as enrollment continues to decline at community colleges, HBCUs, and other minority-serving institutions, tuition revenue and enrollment-based funding may be put at even higher risk. These demographic patterns suggest that the funding disparities between institution types may not only be unequal, but inequitable as well, as states increase the existing advantages of White students from affluent backgrounds by providing the most resources to institutions serving them.

State funding for higher education exists in a context of other, underlying biases: States that are increasingly racially and ethnically diverse spend significantly less on public higher education—and states with rapidly shrinking White majorities make the steepest cuts.[8] These funding decisions arise in part from White politicians and constituents’ beliefs that people from low-income backgrounds, Black people, and Hispanic/Latino people are less deserving of public assistance and welfare.[9] While policy reports have begun to document the trends in state funding by institutional type and student demographics, state policymakers must take further steps themselves to assess and evaluate how to allocate postsecondary funding more equitably.

State finance equity audits have been discussed in the K-12 policy context as a way to determine how differences in state funding are distributed to students of different races, classes, and genders, and how those funding differences relate to outcomes associated with school policies, programs, teacher quality, or achievement.[10] In higher education, a finance equity audit could help state policymakers assess how policies affect students of color and students from low-income backgrounds. Policymakers could then aim to communicate the findings of the audit and create and implement a plan of action to change policy.

Existing proposals for state finance equity audits have notable similarities: that the audits should be publicly accessible and transparent, have clear and informative data points that are disaggregated by race/ethnicity and other important characteristics, and directly inform subsequent policy.

The Education Trust outlines an overarching framework for state equity audits in general, proposing a multiphase process of (1) assessment, (2) audit, and (3) action planning for all policies, practices, and principles. It covers issues such as how to assess a state’s readiness to undertake an equity audit, what stakeholders should be convened in a finance audit, what data are needed, and what outcomes should be assessed. It also discusses dissemination, implementation, and accountability plans.

In a Third Way report, Hillman argues that a state finance equity audit should be transparent and accessible, and break down each college’s spending per student, state appropriations, and tuition revenue. This information should be used to inform funding formulas, grant making, improvement monitoring, and other efforts to assess equity and adequacy in higher education finance.

Under a college-completion grant program recently proposed by the House Education and Labor Committee (H.R. 5376), a state applying for funding would conduct a finance equity audit and provide a report on per-student funding; state appropriations per student; the share of students at each public institution who are students of color, low-income students, students with disabilities, students in need of remediation, or first-generation college students; and the public institutions in the state that received less funding on a per-student basis and are serving disproportionately high populations of the listed student populations.

In the absence of a federal requirement, a state with a potentially receptive government can conduct its own finance equity audit for higher education. State higher education agencies have the required expertise regarding their existing funding structure and have access to the necessary data. They could use the findings from a finance equity audit to propose changes to state lawmakers that would address the inequitable distribution of state resources.

[6]Broad-access colleges are those that have open or minimally selective admissions policies.