An Independent Evaluation of the National Study of Learning Mindsets 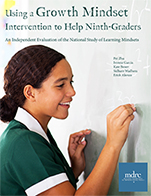 The transition from middle school to high school can be challenging for adolescents as they are faced with new academic challenges and an unfamiliar social environment. Students who successfully navigate this transition and pass their ninth-grade classes are far more likely to graduate from high school with their peers and attend college than those who fail courses in the ninth grade. The growing awareness of the importance of the first year of high school for future success has prompted the development of interventions for ninth-graders.

One type of such intervention uses psychological tools to communicate to young people that their brains can grow “stronger.” These positive beliefs about intelligence, often referred to as “growth mindset” beliefs, are expected to result in academic resilience, which can lead to better academic performance.

To test whether a growth mindset intervention could improve the academic performance of adolescents, the National Study of Learning Mindsets (NSLM) implemented a low-cost growth mindset intervention specifically designed for ninth-graders in a nationally representative sample of regular high schools during the 2015-2016 school year. The national study used a student-level randomized controlled trial design to gauge the impacts of this intervention on students’ mindsets about intelligence, their own behaviors, and their academic achievements. With support from the Bill & Melinda Gates Foundation, MDRC reviewed the data from the NSLM and conducted an independent evaluation of this growth mindset intervention.

This evaluation found the following:

These findings are substantively consistent with the results published by the NSLM research team.

An Independent Evaluation of the Growth Mindset Intervention