What Happens After the Program Ends? | MDRC
Skip to main content

What Happens After the Program Ends?

A Synthesis of Post-Program Effects in Higher Education 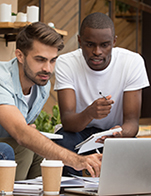 Some education programs’ early positive effects disappear over time. Other programs have unanticipated positive long-term effects. Foundations warn of the dangers of putting too much weight on in-program effects, which, they say, often fade after a program ends. This Issue Focus tackles the topic of post-program effects in postsecondary education. Are in-program effects—that is, the effects observed while the program was active—maintained once the program ends? Do they grow and improve? Or do they fade out?

This investigation capitalizes on two decades of rigorous program evaluations conducted by MDRC, including approximately 25 postsecondary programs, to consider those questions. The Higher Education Randomized Controlled Trials (THE RCT) draw from a database of student-level data from 31 MDRC projects, sampling 67,400 stu­dents.

The results of THE RCT are striking: During the year after these programs ended, effects on academic progress were consistently maintained. There is no evidence of discernible fade-out, which provides encouraging information about the lasting value of many postsecondary programs and the value of evidence collected from them. There was also no evidence of post-program growth, perhaps prompting the need to develop programs that equip students for success over the long term.

How to Design and Implement Advising Services in Community Colleges

Lessons from Two Decades of Research and Technical Assistance